As a vor v zakone, mob boss Razhden Shulaya (above) was an official member of a century-old criminal tradition. As such, he was treated as Russian Mafia royalty. He used that position to run a sprawling organization involved in kidnapping, assault, fraud, extortion, and money laundering throughout the United States.

It was on the streets of St. Petersburg, Russia, that Shulaya earned his stripes in the Russian underworld fraternity of the vory v zakone, or thieves-in-law. Welcomed into this brotherhood, he enjoyed its protection and influence.

As a member, he now too could offer the same to other Russian gangsters seeking his guidance. His powerful position also enabled him to demand tribute payments from low-level criminals. More importantly, his title traveled along with him everywhere he went - even to the United States of America.

Russian Mafia has no boundaries

Shulaya’s center of operations was based in New York City, but he set up various crews with its members operating in New Jersey, Pennsylvania, Florida, and Nevada. Of course, as an international Russian Mafia boss his organization knew no boundaries.

Most of his underlings were born in Russia and countries once part of the Soviet Union and many maintained substantial ties to Georgia, Ukraine, and the Russian Federation. They traveled there regularly, communicated with associates in those countries, and transferred criminal proceeds to individuals there.

From bribes to brothels: Business was booming

There were enough proceeds to transfer. Business was booming in the United States. Shulaya liked to be on top things and personally oversaw the various illicit activities his associates were involved in. Whether it was extortion, trafficking stolen goods, bribing corrupt police officers or running gambling businesses and a brothel in Brooklyn, Shulaya kept a close eye on his interests.

White collar crime also was a favorite. His crews engaged in identity theft, credit card fraud, and laundered their ill-gotten gains through a fraudulently established vodka import-export company. Shulaya also created a scheme to defraud casinos by targeting particular models of electronic slot machines using a complicated algorithm designed to predict the behavior of those machines.

To obtain the technology needed to commit that fraud, he kidnapped a software engineer in Las Vegas in 2014. Shulaya then refined the technology by training lower-level members to execute this casino scam using smartphones and software developed by his organization. 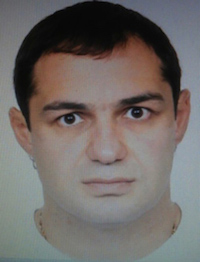 As the kidnapping showed, Shulaya (right) had no qualms about using force or violence – against anyone. He pistol-whipped a relative and gave a public beating to a disrespectful member of his gang. He even showed around photographs of the badly disfigured face of his former lieutenant Mamuka Chaganava, who he had beaten to a pulp. He took pride in his brutal work and was unafraid of retribution or Chaganava perhaps turning to police, saying: “For him, I am a god.”

Perhaps, but it also helped that he was usually flanked by Avtandil Khurtsidze, a former middleweight boxing champion and his chief enforcer and debt collector. Khurtsidze was captured on video twice assaulting others on orders of Shulaya and planned additional acts of violence with his boss targeting fellow members whom they perceived as having disrespected Shulaya’s status as a vor.

As the threats and beatings continued, the feds had found their target. On June 7, 2017, Shulaya and 32 members of his enterprise were hit with three indictments and one complaint charging them with a variety of racketeering charges.

Khurtsidze was also found guilty on racketeering and related charges and was subsequently sentenced on September 7, 2018 to 10 years behind bars.

41-year-old Shulaya was sentenced to 45 years in prison on December 19. In addition to the prison term, the Russian vor was sentenced to three years of supervised release and ordered to pay $2,169,270 in forfeiture and restitution in the amount of $550,000.