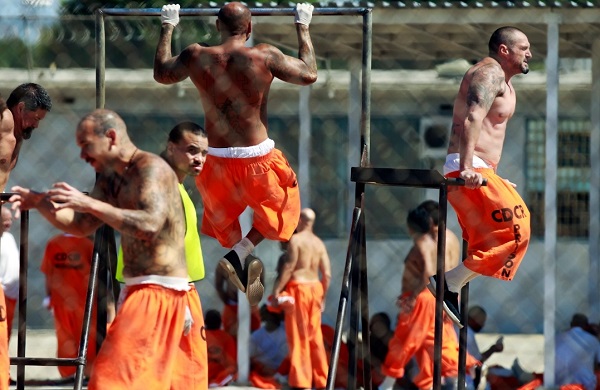 Doing time is no picnic. In prison you’re away from your loved ones, your home, and surrounded by stone-cold killers, gangsters, and crazies, who could shank you if they feel like it. How does one remain sane and healthy in such an environment? Gangsters Inc. sat down with two guys who tell us how to come out of prison fitter than ever.

David “Chicky” Cecchetelli is no stranger to doing time or hanging around with serious individuals. As an alleged associate in the Springfield crew of late Genovese crime family capo Adolfo Bruno, he dealt with the pressures of working under the always watchful eye of law enforcement and the subsequent heat that came with it. He spent several stints in prison for bookmaking conspiracy. Rather than let it get him down, he made the best of it. 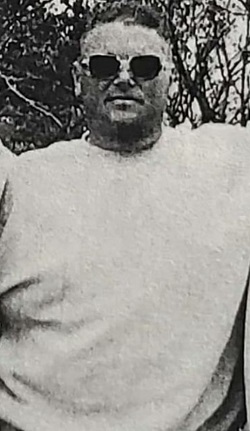 “People don’t realize that if you put your head on straight in there it is real easy,” Cecchetelli (right) tells us. “You do your time and don’t let the time do you.” While serving his time in Canaan penitentiary in the mid-2000s, he got straight into his routine. “I walked 6 miles every day in the morning and afternoon. I didn’t have new weights but I made do. I ate healthy. I ordered off the commissary,  cause you’re not gonna eat and lose weight off of the food they give you. You do a routine and you’re not drinking, not smoking cigarettes, and then you can come out looking like a movie star.”

Cecchetelli says he has always struggled with his weight. He goes up and down like a yoyo. “Back then I was huge when I went in. In less than a year I lost almost 200 pounds. I had a tan and looked like I had done a spa thing on the Bahamas.”

Former drug kingpin and writer/producer of hit Netflix documentary “WHITE BOY” Seth Ferranti can relate. “I would do cardio, pushups, pull ups, burpees, planks, and set ups every day for an hour or two,” he writes to Gangsters Inc. “Distance running and sprints and the exercise bike. Plus I played a lot of sports too. Soccer, basketball, football, volleyball, softball, I did it all.”

He had plenty of time to do it. While still in his teens, Ferranti (right) set up a drug ring that spanned five states, selling marijuana and LSD to college kids. He was caught by the DEA in 1993 when he was 22 years old. Authorities slapped the kingpin label on him and sentenced him to over 25 years in prison. He was released in 2015 after serving 21 years. 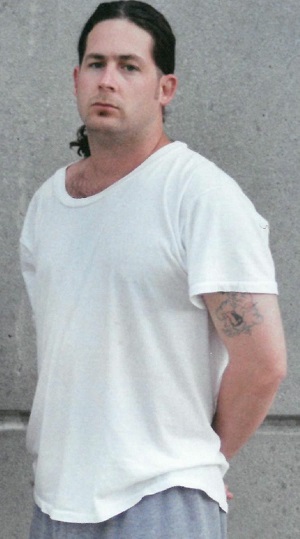 Serving the long stretch that Ferranti (right) served, he also watched his diet. “I used to get a guy from the kitchen to smuggle me vegetables like onions and green peppers. I paid the butcher in the kitchen to bring me raw meat which I would cook in the prison microwaves. I would usually mix this with some rice and then boom I had a nice and healthy home cooked meal. I ate a lot of tuna and oatmeal too plus peanut butter and protein bars were the staples of my diet. I combined this with a vigorous exercise routine.”

Despite his vigorous workout routine, Ferranti says there were other inmates whose workouts made his look tame. Ferranti: “They would lift weights all day - bench press, squats, deadlifts. I used to hit the weights when I was younger but as I did time and got older I moved away from weights and did mostly body weight exercises. Some guys did Tabata routines or CrossFit type of stuff. They were vicious with it. There would always be a crew of dudes that seemed to be out on the yard working out all day. And they were shredded up and cock diesel.”

Cecchetelli knows the type, but was especially impressed by the mental toughness of some fellow inmates facing life in prison, or worse, like alleged Bonanno crime family boss Vincent Basciano, who was housed in the Metropolitan Correctional Center (MCC) in Manhattan, New York. “It's a bad place,” Cecchetelli says of the MCC. “You’re in lock down all the time. It's a heavy hitter joint. I was there before I was transferred to Canaan penitentiary.”

He was only there for 2 months, but immediately hit it off with Basciano. “He took a liking to me for no other reason than I made him laugh,” Cecchetelli explains.

While they were housed together, Cecchtelli got an up-close look at Basciano’s discipline and focus. “I have never seen a guy do better time than Vinny Basciano. He would run up and down the stairs between the bottom and top tier and sweat would drip to the floor. It was a great workout and Vinny was religious in doing that every single day.” 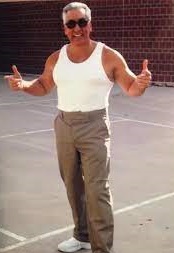 Basciano (right) had a strict routine that began with a shave and shower in the morning. At 8 o’ clock sharp, he would be in the prison library studying his books to fight his case. He would work on that all days until around 4 pm. Then he’d put on his sweatpants, shirt and sneakers and do his workout consisting of running the stairs and bodyweight exercises like burpees.

“I would watch him for a week and then he would bust my chops,” Cecchetelli says. “’Come on! Let's go! Join me!’ he would say, but I could never keep up with him. He would run up the stairs back and forth forever. But by doing the steps, walking the stairs with Vinny I was losing a lot of weight in those 2 months.”

What struck him most, was how relaxed Basciano looked. “He was always smiling, tan, like he was on vacation. I was in there for a lousy bookmaking case and he was in there facing the death penalty so that was a big difference. This guy is going in for the rest of his life and he’s laughing with me!”

Inside, all you have is a positive mindset to keep you going. And if you want to stay fit you have to think outside the box. Despite what you may have seen on television, prison is not outfitted like a gym. Inmates have to get creative.

Cecchetelli: “Guys would take a broom and unscrew the broom off the stick. Then they would take these big plastic milk cartons which would hold 4 gallons of milk and replace the milk with rocks or sand from the yard and put them on the stick so they had a barbel of dumbbell for weightlifting.” 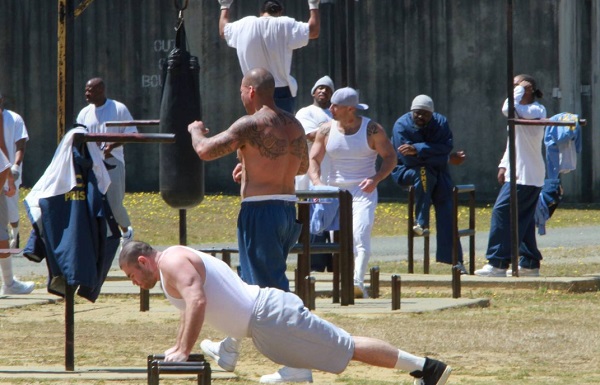 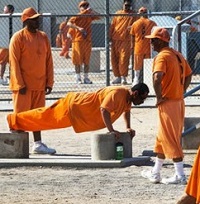 Working out helps one to cope with the insanity that goes on in prison. It keeps the mind quiet and the body lean. In turn, this helps when things get dangerous, which, behind bars, can happen in the blink of an eye. If you are attacked, you need to be able to defend yourself. A strong body helps with that. No wonder then that members of prison gangs have turned a simple workout into something else altogether.

Cecchetelli: “Everyone does these workouts, but these groups do it altogether and it sets them apart from the regular prisoners. You might have six Italian guys working out together, to keep each other company, but not in the numbers that these guys are doing it in. That's very noticeable when you are in a yard with these people.”

“The Surenos would be out en mass doing burpees on the yard,” Ferranti adds. “Their routine consisted of 113 Navy Seal style burpees (see video below by Moses Cuevas for an example). Then they would hit the track for a five mile run. These dudes didn’t fuck around. There would be 20-30 of them exercising together. Shirts tied around their heads, tattoos representing their hoods and gang affiliations. It was quite a sight. They were known as the most vicious dudes on the yard and their exercise routine confirmed. They didn’t fuck around in anything they did. They went hard as fuck.”

Back on the streets

As inmates are finishing up their sentence, they should be looking like a million bucks of pure muscle, ready to impress the ladies. But back home, they are stripped of their strict regime and faced with lots of temptations.

“I got out and was buff and trained,” Cecchetelli tells us. “Got out and was in a parole house in Boston. Still kept good. I was enjoying the food again, but I watched what I ate and ate healthy. Then as time goes on, on a date or with the fellas, I would have a glass of swine. In the life, no matter where you go, there is food. No matter where you went there was food. Go to their houses: food. Go to dinner: food. Food is everything! When people die, there is food. When people celebrate, there is food. When people are sad, they have food.  Whether people are happy or sad, they have food. Now, anything, whether it's gambling, sex or food, anything in abundance is no good No matter what it is.”

With age comes wisdom. After getting to know his pitfalls, Cecchetelli has adapted. He goes for walks and loves to swim. He has his cheat meals on a specific day and tries to eat healthy the rest of the week. “Everyone needs that break. You gotta pick and choose your battles. In prison you can be a lot more structured. You don't have to worry about the outside world as long as your kids are healthy, your wife is happy, and you got money coming in. The only worries you have are about working out, getting through your time and finishing your sentence. That's it so when you're in there it's a lot easier losing weight. A lot easier than when you’re on the street.”