Steve Brown is a former drug smuggler who has written five books on organized crime in The Netherlands. He also has a weblog which you can visit by clicking here.

When I was making the tv program "Tough Guys" (Zware Jongens) for Dutch tv network Veronica I wanted to interview a few 'rippers'. Of course that would be an exciting item. The first man I wanted to interview was Ferry Koch. Unfortunately for the viewers I could not interview him anymore since he had already been murdered. But because I had been friends with him for many years I can tell you something about this 'King of the Rip'. 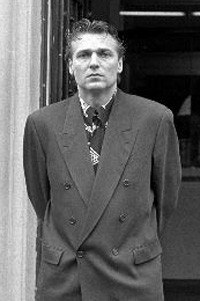 Ferry made the underworld tremble in fear for many years. His name was synonimous with ripping and fucking. He had come up with many ways of ripping off fellow criminals; from using extreme violence to the refined sting. Unfortunately his career ended the way the career of most people who steal from criminals ends. Upon arriving at his house one morning he was hit with nine bullets. The shots were presumably fired by Martin Hoogland (photo on the right, who was later convicted of the murder of Klaas Bruinsma and himself killed a few years ago.) I assume it was Martin because Martin told me, mostly when he was stoned, all the gory bloody details himself when we were drinking in a bar. What can I say, during the late 1980s and early 1990s people weren't so secretive about a murder more or less. The patrol cop was sitting next to us like he didn't care, so to speak.

Before that fatal day, Ferry already had survived an attempt on his life, catching seven bullets in the process. After being shot Ferry drove himself to the Slotervaart hospital (in Amsterdam). The fact that he was still alive was a miracle. After the much needed surgery Ferry told the police nothing. He took care of this type of 'business' himself.

He kept thinking Charlie Wong (by now also murdered) was behind the assassination attempt. Ferry and Wong were involved in a long running conflict about a villa in Friesland (Dutch northern province), which Ferry had ripped from Wong, when Wong was in prison.

Shortly thereafter Ferry himself shot two men in a nightclub in Rotterdam in connection with a 'rip' of five kilos of coke. They had the nerve to ask him what happened to their kilos. One of the men had about five bullets in his leg. Ferry had fired away in the nightclub. And oddly enough non of the 400 people who were there had seen anything. After the shooting a content Ferry drove his mercedes back to Amsterdam.

Ferry's foremost activities were much like those of his Yugoslavian colleagues, being the broker between conflicts between gangsters, where Ferry, just like the Yugos, takes the money off of both parties. It is no surprise then that Ferry always got along with the Yugoslavian gangs of both Paja and Duja, even working together with them at times.

Ferry's life saying was: "Together against". He had made enough money to be set for life, and always wore expensive clothes and outragious jewelry. He wore a $90,000 Rolex watch with a wristband filled with rubies and diamants. Even the watch dial was blinking with diamants. It would make a magpie go blind. But you also saw Ferry wearing brightly colored track suits that made your eyes hurt. For the weekends Ferry drove a classic Auburn, green, with golden spoilers and golden rims. Every now and then I had to ride along for a drive around the Dam. Ferry wore an English lord cap and I sat beside him in that cabrio sports car. While waiting in front of a traffic light crowds gathered, people looked at us as if we were Batman and Robin in the batmobile. Ferry would always say "ain't this nice?". Later the 'Ferry-mobile' would turn to ashes in front of my house in the Michelangelostraat in Oud-Zuid, the upscale neighborhood of Amsterdam. 'My' neighbors looked on in disgust at the burning car and us. All this in their nice posh neighborhood.

Ferry had one leg which dragged a bit. He was a bit overweight, and had the appearance of a pig, not really that awful, but with those beady eyes. But Ferry had sex at least once every day. And also drove through the Red Light District once every day. "Looking at crotches" he called that. And I'll be damned, in the beginning of our friendship I drove along with him a couple of times. He made a lengthy stop whenever he saw a 'babe' and watched her till he had had a thorough look at her crotch.

All the hookers knew Ferry and waived at him when he passed by. He would also go inside to 'get some information', as he put it. We also attended a party held by a well known female drugdealer one time, when Ferry came downstairs all heated up saying 'Steve you'll never guess who's crotch I was just in.' 'Well, who?' He then said the name of a famous Dutch tv star. 'Steve, she'll do anything for some coke. Come on.' This tv diva has since had everybody with a bit of money or cocaine in her crotch, and is still going strong: a real die-hard.

Ferry snorted a gram of cocaine a day, and you never noticed a thing about him. He was the exception regarding that. He didn't sleep more than two hours a day. How he did this was a riddle to me. During Ferry's days we drove back and forth through The Netherlands, worked hard and there were a lot of shootings in connection with our 'conflict brokering'. 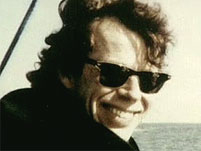 Ferry is the only person who, during the early days of Godfather Klaas Bruinsma (photo on the left), slapped the crime boss around. From that day on he had a special place in the (stone) heart of Bruinsma. But Ferry was proud of that. It meant something to be the only person who slapped the most feared man in The Netherlands. Bruinsma walked around with a red cheek for several days.

The run-up to Ferry's murder had a lot to do with his agressive behaviour. Before his death Ferry had stolen a stash of 150 kilos of hashish from Bruinsma. The group had warned Ferry that this was the last time that he would rip their drugs. Bruinsma had let him know during a short chance meeting.

After that Bruinsma sent his personal bodyguard Geurt Roos to Ferry's house to give him a second warning. Bruinsma had given Roos a letter, which he had to give to Ferry, hoping to avoid Roos fucking up the warning. The warning was a bit like this: 'You have to return the whole stash and pay a fine. If you rip us again, you die.'

Ferry, not a fool himself, accepted the warning in front of his house. Behind the front door an associate of his was waiting with a gun in hand. Shortly thereafter Ferry was killed. Ferry arrived at his house at his usual time of 6am, where Martin Hoogland (according to Martin himself) awaited him wearing a baseball cap and fired seven or nine bullets into his body. Ferry had tried to reach for his gun which he kept in his car, but died trying. Martin sprayed the whole bloody scene with a can to make the job impossible for the police dogs. The mercedes must have looked like a colander, just like Ferry.