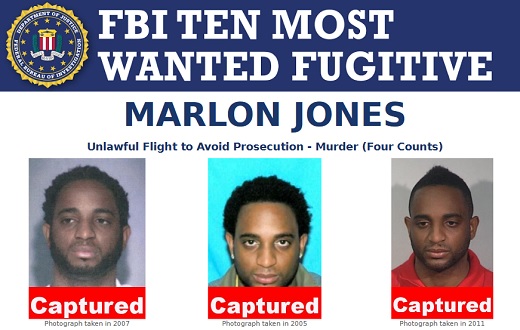 Just one day after the FBI placed Jamaican gangster Marlon Jones on its Ten Most Wanted Fugitives list, he is in custody. He is charged with involvement in the shooting murder of four individuals in Los Angeles.

Jones has a violent criminal history in the United States, where the FBI believes he is residing illegally. Authorities allege he is a member of an East Coast Jamaican organized crime group involved in the illegal distribution of marijuana.

While attending a birthday party on October 15, 2016, Jones allegedly shot and killed a rival Jamaican gang member. The party was being held at a crowded home in the West Adams District of Los Angeles that had been temporarily converted into a restaurant.

According to detectives from the Los Angeles Police Department’s Criminal Gangs Homicide Division, an exchange of gunfire took place between rival gang members, leaving four dead and ten others wounded. They believe Jones was deliberately sent to the party to settle a disagreement with the rival gang.

“The crimes allegedly committed by Marlon Jones are extremely violent, earning him a place on the FBI’s Top Ten list,” said Deirdre L. Fike, the assistant director in charge of the FBI’s Los Angeles Field Office. “The publicity the Top Ten list affords investigators cannot be overstated, as its continued success has shown. Our Fugitive Task Force is highly capable at finding dangerous fugitives and will use their expertise, coupled with the public’s assistance and a large reward offer, to locate and capture Marlon Jones.”

Indeed, they did. A $100,000 reward was enough incentive. Acting on a tip from the public, the FBI’s fugitive task force arrested Jones yesterday after a freeway pursuit.

His arrest brings to end a difficult search by LAPD detectives investigating the case. They received information that Jones had been visiting from New York and staying with associates in Los Angeles, but were unable to locate him.

As an internationally operating gangster with ties to New York, New Jersey, Connecticut, California, Tennessee, the Virgin Islands, and Jamaica, Jones had plenty of options for escape. Furthermore, he was very savvy by using multiple identities, all with different dates of birth between 1970 and 1981.

In the end, though, the heat that comes with being one of America’s Ten Most Wanted Fugitives proved too much.