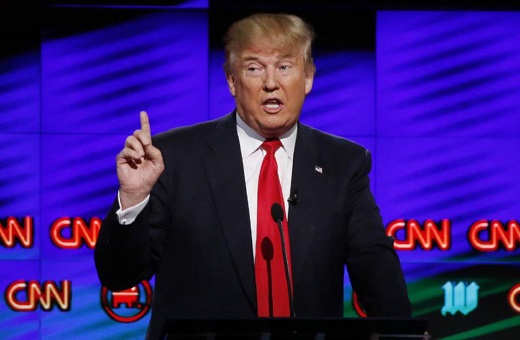 There’s a new boss in town, Donald J. Trump beat the odds, polls, and his opponent Hillary Clinton to become the 45th President of the United States of America. With the country’s mighty security forces under his command, we at Gangsters Inc. asked four crime experts how President Trump will fight organized crime, from the mob to El Chapo, and who will accompany him on that battle.

How quickly things change. Scandal followed scandal as Trump trailed Hillary Clinton in the polls. Little over a week ago, Yahoo News released a video showing Donald Trump next to a man he denied having ever met. The video showed Trump and Robert LiButti in the front row of a 1988 WrestleMania match in Atlantic City, New Jersey. LiButti was a high-roller with a shady side. He had connections to the Mafia, more specifically Gambino crime family boss John Gotti.

Though rumors about LiButti and Trump had been swirling in the media since the summer, Trump always denied knowing him. Then, a week before the election, Yahoo News posted the video. Here, then, was more proof of Trump’s infamous mob connections, the media hinted.

If it was meant as a warning not to vote for this man, the message failed. Perhaps because no one really cared about Trump’s alleged friends in the life, many see it is part of the business Trump is in. “The president-elect Donald Trump has experience in doing business in the New Jersey casino industry and Manhattan construction,” Gary Jenkins, a former Intelligence Unit detective with the Kansas City Police Department, explains to Gangsters Inc. “Because of that, he had to rub elbows with old school La Cosa Nostra associates.”

Back in those days, the mob had construction and the unions on a lock. No hardhat set foot on a building site without the explicit approval of higher-ups in the Mafia. “The fact is it would have been difficult to maneuver the New York business landscape, twenty or thirty years ago at least, without having some interaction with the mob - direct or indirect,” award-winning crime historian Christian Cipollini admits.

Could those old business dealings come back to haunt him? “Trump's alleged mob ties are decades old at this point and probably won't influence how he directs the Justice Department to tackle organized crime issues,” mob author Scott Deitche says. “Certainly, with La Cosa Nostra nowhere near what its power was in the 1980s.”

Ex-convict-turned-author Seth Ferranti concurs, “I don’t think it’s like the Kennedys or anything like that,” he says. “The Mafia in this country is kind of dead. Not really much happening and not really much power there anymore. I don’t see Trump having a problem with Mafia guys.”

Known for writing books about so-called “street legends,” drug kingpins and gangbangers, Ferranti recognizes a little gangster in the president-elect himself. “Trump is a businessman but he is a gangster himself in a way,” Ferranti explains. “Trump really doesn’t give a fuck. I think Trump will go after them hard if they don’t toe the line, which is his line now. He will make backroom deals when he can if it benefits him or the country or the direction he is trying to go. So I think gangsters are safe as long as they don’t draw too much attention and put themselves on blast.”

“Because of his partnership and close connection to the old mob nemesis, Rudy Giuliani, I do not see his old mobbed up business contacts getting any special consideration,” Gary Jenkins says. “Trump is a pragmatist and he will be advised by people like Giuliani and other conservative law enforcement types on these issues.”

Former New York mayor Rudolph Giuliani has been a staunch and very loyal Trump supporter and will surely be rewarded by the newly elected president. Known also for his days as a fierce anti-Mafia prosecutor Giuliani is a hardline crimefighter with a lot of hands-on experience.

“I would not be surprised to see Giuliani as the next Attorney General or at least as someone who will have input on that,” Jenkins adds. Scott Deitche agrees, “Especially with his background as Associate Attorney General under President Ronald Reagan, and U.S. Attorney for the Southern District of New York, where he oversaw the Commission Trial.”

During his presidential campaign, Trump excessively attacked illegal immigrants from Mexico, calling them rapists and criminals, and promising to erect a wall between Mexico and the United States that Mexico would pay for.

With the war on drugs turning Mexico into a deadlier place than Afghanistan, Trump will have his work cut out for him. While the American Mafia has lost power and influence, Mexican drug cartels have gained it on an international scale, with reach into the country’s highest political office, and funds that allow them to maintain professionally trained paramilitary units for security or murder assignments.

“I think he is going to build a wall and I think he is going to get real strict on immigration,” Seth Ferranti tells us. “He wants to make America great again or so he says so I think he will fight hard to shut the borders and limit what comes into our country. I believe he has the balls also to order raids and missions against the cartels. I can see a lot of Special Forces type missions even into Mexico with Trump in charge.”

“Regardless of whether Trump moves ahead with plans to build a wall at the US/Mexico border, Mexican cartels will certainly be a focus of the Justice Department, Border Patrol, and Homeland Security,” Deitche says.

“As the national drug policy changes, I see Trump appointing a Drug Czar that lessens the law enforcement approach and increases the medical problem approach,” Gary Jenkins tells us. “Since the whole system of jailing folks for drugs is so expensive and not cost effective, I see a businessman type taking a different view. Because of his need to take a strong stand against illegal immigration, I see him making the Mexican drug cartels a high priority, he can still put more emphasis on medical treatment for addicts while going after the top echelon drug kingpins in Mexico. I recently spoke with a recently retired federal narcotics upper management officer. He was adamant that the previous policy of investigate, arrest, imprison our way out of the national drug addiction problem has failed and the medical model is worth a try.”

When all is said and done, President Trump will stand for justice and combat criminals just like his predecessors have done. Though it remains to be seen if he makes any changes to the modus operandi, Trump stands with those protecting law and order in society.

“Back in 2011, Obama signed an executive order freezing assets of four major transnational organized crime groups - The Camorra, Russian Brother Circle, the Yakuza, and the Zetas cartel,” Scott Deitche says. “With the ties between some of these groups and terrorist networks, I don't imagine there will be a major shift in strategy by the Trump administration.”

For all his tough talk, Christian Cipollini remains skeptical of Trump’s promises. “Talk is talk until action is applied,” he says. “Despite even the most hardline and noble efforts to curtail major international and domestic problems, unless the root issues are addressed (the war on drugs, addiction, poverty, social and economic redlining,) I don’t see how anyone can truly stop the problem. And by ‘problem’ I mean the soundbite the public hears on the news, which is the top of the very dynamic, convoluted and deeply-rooted problems underneath, such as the examples I mentioned before. The illegal and criminal immigration problem is undeniably a very real issue, no matter what side of political spectrum you’re on, it’s a real situation, but putting up a wall, locking down or making promises to do so is probably not the answer.”

Cipollini concludes, “Honestly, as with any new leader, you never quite know what to expect until issues are actually addressed in real time. President-elect Trump may indeed take a hardline stance on organized crime, terrorism, etc., but even if he does – people have to remember that a President doesn’t wield all the power. In reality there are lots of forces working behind the scenes; staff, lobbyists, friends, enemies.”