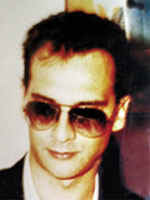 Ever since the arrest of Salvatore "Toto" Riina the power within the leadership of Cosa Nostra (still the most powerful crime organization in the world) has been shifting. One ambitious and ruthless young man can’t wait to grab the top position within the Sicilian Mafia. let me introduce to you Matteo Messina Denaro, the Capo Di Tutti Capi of the 21st century.

"I have to go, but I can’t explain the reasons of my choice to you. At this moment things are testifying against me. I fight for a cause that can’t be understood at this time, but one day people will see that I stood on the side of what was right."

In 1993 the Italian police agencies searched a house in Mazara Del Vallo there they found a letter belonging to Matteo Messina Denaro (40), the rising star of the Sicilian Mafia. Since that letter we have heard nothing of Denaro he’s been in hiding, running from the hunters of the anti mafia. He is public enemy numero uno, seemingly unable to track down. Is he sitting peacefully in a farmhouse on some Sicilian mountain? Or is he controlling his business with an iron fist from abroad? No one knows the answer.

His presence is felt more than ever within Cosa Nostra, the crime group that controls all other Italian crime groups (such as the Neapolitan Camorra, the Calabrian Ndrangheta and the Sacra Corona Unita from Pulii). Even more so, Diabolik is trying hard to push the current Capo Di Tutti Capi (boss of all bosses), Bernardo Provenzano, off the throne. Some mafia investigators are assuming that he already took over from Provenzano.

"If you compare Cosa Nostra with a normal business, then you could say that Provenzano has been demoted. And Denaro has been promoted." says Guiseppa Luma, head of the parliamentary anti mafia commission in the British newspaper The Times.
A Man Of Honour At birth

Any Mafioso`s life is one big cliche, Messina Denaro`s is no different. Denaro was born to be a Mafioso. He was born on April 26, 1962 in Castelvetrano, near Trapani. It was in this period that the Mafia clans were gaining power and influence, prime example: the Corleone Clan.

It was also in this time that the American Mafia went into a working relationship with the Sicilians in the extremely profitable heroin trade. The Sicilian Island was controlled by the so called "Men of Honour", which is how Mafiosi see themselves. The local population didn’t object with that term most use the term to refer to members of the Mafia. the Mafia saw to it that there was economic activity on the poor island and on top of that Mafiosi acted like they were fighting for a higher cause: the fight against the Italian State. The Italian State was seen by many Sicilians as an occupier. It was in these times and this atmosphere that little Matteo Messina Denaro grew up. his father Francesco was also a man of honour and would eventually become Capo of the Trapani region. He was also one of the trusted men of Toto Riina.

It wasn’t long before he saw that Messina Denaro junior had talent. According to the Italian weekly magazine L’Espresso he learned how to use a gun when he was only 14. 4 years later he committed his first murder. And it didn't` stop at that one murder. At the time of writing this article Denaro has reputedly killed around 50 people and he is proud of it.

"I filled a cemetery all by myself" he bragged once.

Friend of the Colombians Matteo Messina Denaro was a replica of his teacher Toto Riina. Extremely violent, cruel, not afraid of anyone but above all intelligent enough to stay out of the hands of justice. Diabolik also has a nose for profitable business. He made his fortune dealing in drugs and collecting pizzo, protection money extorted from businesses. In the drug trade his career advanced at breathtaking speed. Within several years he grew from being a small distributor to becoming an international player with whom people need to be careful. Even the American security services took notice of him.

The FBI sees Denaro as one of the biggest drug traders in the world. With this in mind it is no surprise that he has close contacts with more than one Colombian drug-lord. With his growing drugs business he leaves his mark on Cosa Nostra. The Italians don’t call the Sicilian Mafia the Narco Mafia for nothing. Denaro’s climb to the top has begun, especially after taking over the position of capo of the Trapani region from his father. This is only the beginning.

A Member of the Supercosa 1993. A bloody year in Italian history. A historical year in the history of the Mafia. It was in this year that there was a top meeting between heads of the Russian Mafia and Cosa Nostra. Italian justice hit them hard by arresting dozens of Mafiosi. The Italian office of homeland affairs pulled apart 70 governing panels because they were infiltrated by the Mafia. The Pentiti, better known as informants, government witnesses or rats, caused much damage to Cosa Nostra. The highlight of the war against the Mafia was the arrest of Salvatore "Toto" Riina, the boss of bosses. 1993 was also an important year for Matteo Messina Denaro. in that year, he just turned 31, he enters the supercosa. The supercosa is a select group of capi who know all the dark secrets of Cosa Nostra. As he entered this position of power he decided to, as he called it, "fight a just war against the Italian State." In June 1993 bombs went off in Rome, Firenze and Milan. 10 people die as a result of the bombings. One of the targets was the Catholic church. The coordinator of these attacks: Matteo Messina Denaro. Diabolik not only sends his troops out to attack the church, the justice department and the police agencies he also sends a clear message to the media. Denaro executes several journalists who dug too deep into the world of Cosa Nostra. Slowly the Italian justice department starts to realize that the arrest of Toto Riina and several hundred other big fish along with lower ranking Mafiosi hasn’t destabilized Cosa Nostra. They also realize that with Denaro a new devil has stepped up to the forefront. the hunt for Diabolik begins.
Target: Bernardo Provenzano

The rising star of Cosa Nostra goes into hiding in 1993 after Giovanni Brusca, an important pentiti, breaks omerta and tells the government all he knows about the young man. In absence Denaro is sentenced to life in prison. But it doesn’t stop Denaro from continuing his criminal career. Denaro also uses the feelings most Mafiosi have about Provenzano to his own use. The average Mafioso is unhappy with the low profile way of doing business advocated by Bernardo Provenzano, the man who took over from Toto Riina. Provenzano chose a quiet rise back to power for the Mafia he shuns spectacular and high profile murders and attacks. "Why risk losing all our contacts and power within politics with high profile ways when you can commit fraudulent acts in the shadows" was his motto. And that approach has done Cosa Nostra good.

Money made through illegal activities went through the roof just like in the old days and the political contacts were once again corrupted (prime minister Silvio Berlusconi is the prime example of that.) But this way of doing business has given Provenzano the reputation of being weak, reluctant to use violence. the much younger and more violent group of Mafiosi led by Denaro doesn’t want him as a leader anymore and regard him as being weak. Provenzano and Denaro never got along. When the young protégé of Riina was to be inducted in the Supercosa in 1993 Provenzano did everything in his power to stop it, but failed. Provenzano would rather have had Mafiosi such as Pietro Aglieri, Benedetto Spera or Antonino Giuffre who had been arrested in late April inducted in the inner circle but to no avail. "Denaro has put a chainsaw to the chair of Provenzano" an anonymous researcher once said. "He knows it himself cause he doesn’t want to meet with Denaro in person anymore, he’s afraid he’ll get killed".

Sole leadership of Cosa Nostra is within reach of the ambitious Matteo Messina Denaro. That will mean yet another re-styling for the most powerful criminal organization in the world. The cliché of the old Mafia boss who controls his empire from a farm on a mountain makes way for a new cliché: The Sopranos style. "the old mob boss still had mud on his hands" said a police agent in the The Times newspaper. "Denaro drives around in a Porche and loves computer games and reading comic books. He’s extremely wealthy, lives fast and is an almost compulsive womaniser. A real playboy, dressed in an Armani suit, and the almost compulsory eye wear for the modern day Mafiosi the Ray Ban sunglasses. " Another sign that things are changing within the Mafia is this, Denaro is married to a woman named Maria Mesi but he already had a daughter with one Francesca Alagna. This would’ve been impossible at the time of the old Mafia, with it’s conservative ways of thinking. Still, it would be wrong to call the new Denaro generation a bunch of brainless, shallow psychopaths. Because the youthful Denaro turned out to be a brilliant strategist, who is extremely focused on expanding his power.

Denaro understands that infiltration of the political world and the justice world is of extreme importance to a criminal organization. So he too sends his men out into the political world. In the past the Christian Democrats under the leadership of ex prime minister Andreotti were the partners of Cosa Nostra. Nowadays more and more ties between Forza Italia (the party of Silvio Berlusconi) and the Mafia are uncovered. Senator Antonio D’Ali, elected in Trapani and a member of Forza Italia, is said to have good ties via his family with Denaro. Denaro reputedly donated millions to D’Ali`s political fund. A brother-in-law of Denaro, Vito Panicola, was convicted for unwillingly killing his son in an attempt to kill another man. Vito Panicola was a member of the governing council of Trapani. At this moment there are dozens of similar cases all across Italy. Maybe things haven’t changed with Matteo Messina Denaro as new capo di tutti capi.