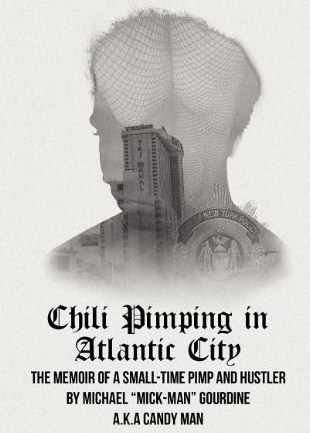 EXCERPT FROM CHILI PIMPING IN ATLANTIC CITY:
MEMOIR OF A SMALL-TIME PIMP AND HUSTLER

This book is published by Strategic Media books. For more information go to (www.strategicmediabooks.com) or scroll down to bottom of this page to read the press release.

“Introduction to the Game”
First off let me explain what a “chili pimp” is.

A chili pimp is a small time pimp; he is a pimp who will have between one and three girls. He does not stay in the most expensive hotels or eats in the most expensive restaurants; he can’t afford to. What he relies on is his ability to give more care, attention and on the spot dependability than a “pimp” can give. All pimps started out as chili-pimps. Some pimps even refer to the stage as the minor leagues. It can also be seen as a make it or break it period in a young pimp’s career. A young kid will either develop a “stable” or he will “blow hoeless” and return to the drug or gigolo game. A chili pimp can either be an amateur or a pimp on his way up.

A chili pimp could also be a pimp who has become addicted to drugs, and in some strange way, the only girl he is left with is the one who really loves him, feels sorry for him, and in her way, has shown that she cares and is willing to continue working the “track” to get him his fix to make him “well.” It’s her way of mothering him, even though she is nursing him from one dope fiend fix to the next. A chili pimp can also be an old pimp who is semi-retired and has sold, retired, blown, been peeled or fired most of his stable and settled down with his “bottom” women and maybe her favorite girl who lives with them like a daughter. In this situation, they will let her recruit a girl from time to time to stay with them.

A chili pimp is never a threat to the established pimp, who actually looks at the chili pimp, not with contempt but as if they are amused by the chili pimps. It’s kind of like how a father or an uncle who looks at his children or nephew’s when they wear his clothes or who are going on their first date.

Established pimps are actually flattered because they know that we are trying to imitate them. That is why, while pimps are brutal in their competition with each other, they deal with chili pimps with “kid” gloves. They will front the chili pimp money, give you advice, and, if one of them takes a liking to you, he might give the chili pimp one of his girls, if his stable is too large.

You must always be careful, though, because pimps are the masters of game and will run game on you, if nothing else, just to test you. An established pimp will see that a chilli pimp has only one girl and will offer him a “rib”; that is, one of his girls whom the chilli pimp will only manage for him but does not own. The two of you will split her “quota”, the target number of money she must make in one night. But in actuality, she is just a spy for that pimp, who has either become jealous or threatened because the chili pimp is starting to rise.

Chili pimps have to concentrate on his budget more than anything else. While the “real” pimps are driving up and down Atlantic and Pacific Avenue in Bentleys and live in the Borgata or Taj Mahal, chili pimps have to live in the El Greco with a small refrigerator, a microwave, ande two beds (thank God). Hopefully, the pad is on the first floor facing Pacific Avenue where the chili pimp can, at any time, walk out and see if his girl is walking home, or if there was any “drama” going on the “track”. He has to keep the nicest clothes that his budget will allow:

(1) So that his girl will not be embarrassed to call him her man
(2) So that they can possibly attract working girls with the hope that they “choose” them over their current pimp, or that they stop “renegading” and come in out of the cold and have a man.

You must always be able to feed your girl and have bail money. You must let her know that you will find her if you don’t hear from her.

As a chili pimp, I let my girl know that I had all the numbers for the hospitals, emergency rooms, police departments, the morgue, bail bondsmen, and a good New Jersey lawyer who knows the ins and outs to local laws, as well as the local prosecutors and judges.

You do this to let her know you have her back. Most of all, you had to let her know that you are more than willing to do what a pimp does best and that is to protect her. You breakdown the rules to her. Never go on any claimed turf and never look at a pimp in his eyes (that’s called reckless eyeballing).

You take a deep breath and hit the track. You’re always on top of your budget like a damn bookkeeper. You must always set your quota lower than the local pimps. You make it advantageous for the girl to stay with you, even though that’s cheating the pimp rules. It means that if she chooses to chase another pimp, she will have to pay him more and keep less money for herself. After all, someone has to pay for that Bentley. You also try to show her what qualities you have that will set you apart from other pimps. You can, for instance, occasionally tell her to call home and check on her child. You keep a tight reign on her, but you try to make her really believe in you because you are worried about her and “love” her.

My personal touch was with, believe it or not, food. I would take mental notes of her favorite foods while we talked and then do my very best to have, if not that very food, the closest to it one could find in Atlantic City waiting for her at 5:00 a.m. when she turned in. You are to provide her with all the toiletries a woman needs, especially those she needs in her line of work: douches, vaginal spray, an endless supply of condoms, female condoms, Listerine, tooth brushes, bobbie pins, scrunchies, curling irons, etc.

I really went the extra mile when trying to make my girl comfortable; I even had the girls try hydrogen peroxide after being out all night. I told them that it worked better than Listerine and that the evidence was in the bubbles. The more bubbles meant the more germs the hydrogen peroxide was killing. My girls liked it; it made them feel clean. Most importantly, it was a hell of a lot cheaper than Listerine. Don’t forget you have to be able to do all of this at certain times from one girl’s “quota”.

Believe me, I never had a dime to spare. Another bonus that helped me get by in Atlantic City was that in New Jersey you couldn’t pump your own gas. You paid after your gas was pumped. I must have hit every gas station in Atlantic City, Egg Harbor, all the way up Black Horse Pike and beyond. I hardly paid for gas once while I was there. Of course, my girl didn’t know it. That would have made me look low budget. I always did it when she was working. I’m sure the “real pimps” have their problems financially, but they are the masters of the “all is well” routine. As a chili pimp you score points with your girl for running this routine because she knows that, more than anyone else, you are desperate to just make it from one day to the next. If you make it from the chili pimp faze to the show-nuff pimping faze then, to say the least, you are tried and true, purified and bona fide, and you have earned the right to be called a PIMP (WITH CAPITAL LETTERS).

Chili Pimping in Atlantic City: The Memoir of a Small-Time Pimp

is the controversial autobiography of Michael Mick-Man Gourdine, AKA the Candyman, as he was known on the street. The book pulls no punches and provides an honest and sometimes shocking look at what one man from the wrong side of tracks felt compelled to do to achieve the American Dream.

Gourdine became a pimp who operated primarily on the streets of Atlantic City, New Jersey, while working as a corrupt NYPD cop who specialized in narcotics trafficking and prostitution. Employed as a police officer from 1990 to 2000, Gourdine reportedly made an estimated $2.5 to 3 million dollars in illegal graft, bribes, prostitution and drug dealing before being fired.

Gourdine was a chili pimp—that is, a small time pimp who had between one and three girls working for him. As a chili pimp, Gourdine didn’t stay in the most expensive hotels or eats in the most expensive restaurants; he couldn’t afford it. Instead he relied on is his ability to give his girls more care, attention and on-the-spot dependability than a bonafide pimp could give. Today, Gourdine recalls, “It is a sad existence that I was lucky enough to escape and maybe some readers will avoid after reading my book.”

Chili Pimping in Atlantic City describes how Gourdine developed the stomach for the pimping game, became a corrupt cop, learned the pimping trade and survived on the mean streets. The author paints vivid profiles of some the interesting characters he meets along the way. He concludes with some hard lessons. “The best way to steer a young boy away from pimping is to change his environment,” Gourdine writes. “If a young boy is starving, living without heat in his house, with no real men around him, guess what he’s going to take when he sees the first person who he deems the best fit to survive in his dismal circumstances? And believe you me, he will not be a law abiding citizen.”

Gourdine now resides somewhere in New Jersey where he owns and manages numerous properties, and changes residences often. He is married with four sons.

Chili Pimping in Atlantic City: The Memoir of a Small-Time Pimp and Hustler

Buy from Amazon: Chili Pimping in Atlantic City: The Memoir of a Small-Time Pimp