This summer several of the most powerful mobsters in Chicago will stand trial for 18 murders and racketeering spanning several decades. The trial is the result of investigation "Family Secrets." It will feature bosses such as James Marcello and Joseph Lombardo and also former mob killers who decided to cooperate with law enforcement, and tell all they know. Two of the witnesses are related to each other: Nicholas Calabrese (64) and Frank Calabrese. Both men are related to one of the defendants: Frank Calabrese Sr (70) Nick as a brother, and Frank as a son. Such treachery is stunning but not uncommon in the mob, where blood ties do not stop family members from ratting out and killing each other.

Nicholas Calabrese is expected to be a strong witness. He has participated in several murders, and can tell the jury about life in the Chicago Outfit. His testimony will be very damaging to his brother Frank, who is charged with 13 murders. Several of those murders were executed by both brothers, such as the murders of Arthur Morawski and Richard Ortiz in 1983. Ortiz was murdered because he had committed a murder which was not sanctioned by The Outfit. Frank Calabrese Sr blocked Ortiz's car while his brother Nick and another hit man fired shotguns at the two victims. Calabrese Sr was taped saying the following about these murders: "Tore 'em up bad. Them'll tear your body up. They're called double-oughts. And you want me to tell you something? The Polish guy that was with him was a nice guy. Okay? But he happened to be at the wrong place. . . . It was said, no matter who's with him, want it done. Now if you back away and you have that opportunity and you don't, then you look like a f------ a------." Nick Calabrese's reason for cooperating came about in part when he heard his brother would "send his blessing" to The Outfit if they wanted to kill his brother. Frank Calabrese Sr would also not avenge his brother's death.

Things were very dysfunctional in the regular family led by Frank Calabrese Sr. The family resided in Elmwood Park, and seemed like a normal loving family. But Frank Sr wasn't a loving father. He would erupt into rage over the smallest things, and start screaming. After that he would start hitting his sons. This abuse continued into adulthood.

Frank Jr had enough of his violent father, and decided it would be better for everybody if he stayed in prison. Frank Sr was serving a 10 year sentence when he and his son were in the same prison. Frank Jr overcame his fears, and principals, and taped the conversations he had with his father. Frank Jr wore earphones and a tape player which the FBI secretly equipped with a bug. If his father found out, the feds could not help. Both men were in prison out of reach from the FBI. Frank Sr talked to his son about his induction into the Mafia, and several murders. The tapes will be very important evidence at the "Family Secrets" Trial.

The feds also have tapes of alleged Outfit boss James Marcello (photo on the left.) From December 2002 to August 2003 they secretly recorded conversations, and videotaped meetings in a prison visiting room in Milan Michigan, between Marcello and his brother, his son, and a friend. Marcello's brother Michael is charged with running his brother's illegal businesses while he was in prison. James Marcello is charged with several murders including the famed Spilotro brothers hit. The Spilotro hit was made famous by Martin Scorsese in his movie Casino, which detailed the time Anthony Spilotro was the mob's man in Las Vegas. Nick Calabrese has given evidence to authorities that Marcello participated in that hit.

The most notorious name on the indictment is that of boss Joseph Lombardo. He has 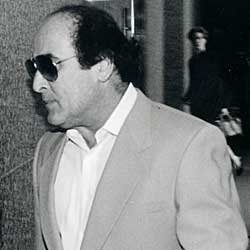 been a high ranking Outfit member for decades. When the indictment came down in April 2005 Lombardo went on the lam. He was eventually arrested in Elmwood Park in January 2006, and is charged with taking out one murder himself. That is the 1974 murder of Daniel Seifert, a witness against Lombardo in a criminal case. Seifert was murdered in front of his family. Lombardo will argue he has an alibi for the time that murder happened. He will also deny ever being made a member of the mob. Another option Lombardo's defense team has in mind is the "Junior Gotti tactic," in which Lombardo will claim he retired from the mob, and thus cannot be part of a conspiracy going back five years from when the 2005 indictment was brought.

The trial will start in the summer. If you want to be kept up to date about the Chicago Outfit visit the forum.