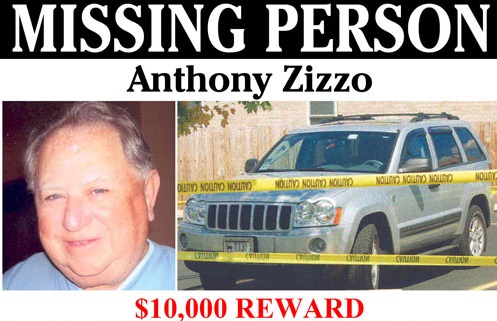 It’s not every day that a mob underboss just vanishes and disappears into thin air without a trace. Yet that’s exactly what happened to Chicago Outfit leader Anthony Zizzo ten years ago. On August 31, 2006, he kissed his wife goodbye and left his home for a lunch with colleagues. He has never been seen since.

Though authorities found his empty Jeep Cherokee parked nearby a restaurant in Melrose Park two days later, his disappearance remains a mystery. Even the FBI is unsure whether Zizzo went into hiding or was murdered by his mob brothers. Of course, the general presumption is that Zizzo was killed over one of many issues related to his life as a Mafia chieftain.

The Chicago Outfit did a good job avoiding prosecutions and keeping a low profile the past two decades. But in 2005 it felt some serious heat from law enforcement during Operation Family Secrets, which exposed the inner-workings of the group and saw two of its own members testify not just against the Outfit, but against one of their relatives as well.

The Family Secrets prosecution caused quite a stir within the group and saw two of its top leaders – Joseph Lombardo and James Marcello – sentenced to life in prison. While all of this was going down, Zizzo, then aged 71, disappeared.

The timing of his disappearance generates several theories: Either his fellow mobsters feared he might become a turncoat and decided to kill him; or maybe Zizzo himself saw the writing on the wall with law enforcement creeping closer and decided to flee from prosecution and go on the lam.

And then there is the theory that his disappearance was simply about the usual mob disputes revolving around money and power. Sources claim Zizzo had a serious feud with capo Michael Sarno about video poker machines, which might’ve turned deadly.

Whatever happened remains pure speculation. That is why the FBI is using this 10-year-anniversary to ask the public to come forward with any information they may have. In return, the FBI is offering a $10,000 reward. If you have any clue as to the who, what, why, and where regarding Zizzo’s disappearance, then contact the FBI Chicago Field Office.