Through narrative, never-before seen photographs, letters, evidence files and expert commentary, readers will enter :a time and place where organized crime was in transition, as was who would be in control of the biggest source of illicit cash – heroin and cocaine. Experience the people, places and things that create an environment where a man like Campbell could exist. Learn the strengths, weaknesses and mindset of Chester Wheeler Campbell. He was a master manipulator, a narcissist, a spy, a courier, a dealer, strong-arm, a ladies man, and of course… a hit man.

From Diary of a Motor City Hit Man: The Chester Wheeler Campbell Story

What is more powerful than the intimidating collection of weapons Chester Campbell amassed? More fearsome than the steely-eyed look he gave? Of far more value than his expensive wardrobe or jewelry and property? Knowledge, that’s what. Nothing, not even an arsenal of guns or an unscrupulous attitude can produce the sort of fear in people that information can. From the dawn of time to modern day – knowledge makes oppressive governments paranoid, puts religious groups on edge, and assures corporations get jittery when business practices are called into question. All it takes is one pervasive individual to gather, contemplate and exercise greater senses of intelligence based on knowledge to either change something for the better, or for worse. Either way, the power of ‘knowing’ is worth more than gold. Acquiring intelligence, in more ways than one, was exactly how Chester Wheeler Campbell maintained an aura of power. His business was not corporate, religious, or governmental. Campbell’s was a direct result of, a necessity within the business of heroin.

Chester Wheeler Campbell knew things. He had collected information so valuable, and potentially damning, that anyone and everyone from both sides of the law became fearful. That is the power of knowledge, and Campbell kept meticulous records of information, handwritten, fully exploited in notebooks. For Detroit’s organized criminals, the narcotics trade in particular; Chester Wheeler Campbell was indeed the most dangerous enforcer because he was armed with data, descriptions, and diagrams. He had been gathering data on everyone and anyone remotely involved in the underworld of Detroit and beyond. Years of intelligence gathering, really from the moment he exited the gate of Jackson Prison, Chester was not one to sit idle. His criminal acumen was second to none by the early 1970’s. Chester Wheeler Campbell scribbled, scrawled, drew, typed, and visually or audibly recorded every bit of information he could acquire on enemies and allies alike. It was like a diary of sorts. 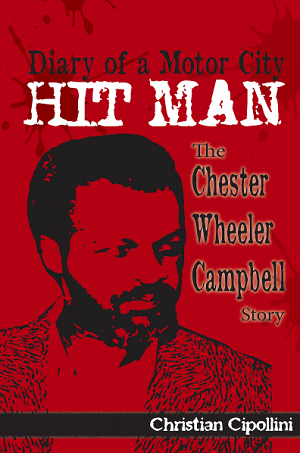 The Motor City Hit Man didn’t keep a diary of his everyday thoughts and feelings; he kept a journal of everything going on in the drug underworld of Detroit Michigan. His diary was not a memoir, but rather a collection of lists, addresses, properties, license plate numbers and phone numbers. Campbell’s notebooks were a reflection of just how corrupt, sinister and realistic the drug trade in Detroit’s underworld was.

The notes contained locations of witnesses, dealers, safe houses, and details for homes of law enforcement officials. Campbell kept track of unsolved murder and drug cases; he had access to cops on the kingpins’ payrolls. This is the sort of information that truly strikes fear into people. He gathered information in every conceivable manner. Surveillance, gossip, shadowing, payoffs, and keeping in the know by simply ‘talking’ to contacts, Campbell did it all. These were all easily applied methods of assembling intelligence. From mobsters to motorcycle clubs, hookers to hit men, pushers to pimps, Chester Wheeler Campbell made the rounds from Detroit to Cleveland, keeping tabs on everyone even remotely involved in underworld business. Everything was jotted down within the pages of his notebook collection.

When Orchard Lake police officers John Walsh and Edward Beyett removed the notebooks from Campbell’s rented Oldsmobile trunk – the true story began to emerge. Again, the police had no idea just how important the paperwork in Chester Wheeler Campbell’s possession really was at first glance. Over the coming weeks though, officials in neighboring Wayne County would jump on board the investigation and give insight they were already privy to on the Detroit strongarm.

One of the first items to draw law enforcement’s ire… a list of presumed future ‘hit’ targets, which included a well-known Assistant Prosecutor in Oakland County named L. Brooks Patterson. The initial review of Campbell’s notes led to the assumption that at least 300 names of individuals were recorded; presumably all potential targets of the assassin, yet in reality many were simply associates and contacts. Contrary to the often overly hyped press coverage at the time, Patterson’s name, as were many of the others, not explicitly noted in Campbell’s book as targets. In some cases, Patterson’s being one such example; names were simply scrawled on a page. Nevertheless, there were enough signs pointing to the danger of anyone having their name in any of Chester’s books. So, upon receiving the disturbing news that he was blatantly referenced in Campbell’s notes – Patterson was given around the clock extra security. This was unprecedented before Chester Campbell entered the picture. The standard way of law and order in both Oakland and Wayne counties was changing abruptly, thanks to the revelations gleaned from Chester’s collection of written materials.

Investigators were also very interested in what appeared to be a list of at least ten names recognized as belonging to unsolved-murder victim cases. All of the murders were considered drug-related, and Campbell was immediately presumed, in the minds of many who read and deciphered his notebooks, as somehow ‘involved’ in each case. There was no proof as such that Campbell had killed anyone on the list, of course, but the information was enough for cops to consider looking much deeper into each unexplained case.

Campbell had made notations of addresses where witnesses were being kept. He sometimes neatly – often times sloppily - wrote detailed, semi-detailed and a lot of ‘coded’ information, down to the license plates, of lawmen and dope peddlers alike. Many streets in and around the Pingree area were listed; safe houses, drug dens and protected witnesses. Nobody was off limits for the hit man. Everyone who heard the news or had been involved in examining the notebooks was, quite understandably, uneasy with the revelations of one Chester Wheeler Campbell. Though the man himself spoke very little to authorities, his possessions were loud proclamations of his dangerous presence in the Motor City and beyond.

Though the press sometimes alluded to Campbell possessing one, or a handful of notebooks – the fact was Chester Wheeler Campbell kept dozens of notebooks. They varied in size and content, many purchased for the bargain price of nineteen cents a piece. Within many of the pages were questions he’d asked himself. He used the pages in some for the purpose of accounting; payoffs, drug transactions and debts especially. He even maintained records of his own arrests… and associates who were implicated with him. Campbell also used some of the notebooks for record keeping in his ‘legitimate’ – legal assistant - work he performed for attorney Wilfrid Rice. Most unusual and disconcerting to authorities, however, was the realization that Campbell also had access to Michigan’s Law Enforcement Information Network system – LEIN. Yes, a hit man in Detroit’s underworld had the ability to access the official mechanism for “information sharing” – exclusive to the criminal justice system since its inception in 1967. This was both illegal and unprecedented. How did Chester Wheeler Campbell obtain LEIN records? The answer lay in a very sketchy, gray area that spanned across the lines of crime, law and politics. Somehow Campbell, or his drug lord employers, had ‘insiders’ working on their behalf. What he was using the LEIN for specifically – to identify the owners of every vehicle license plate he recorded.

Author Christian Cipollini (right), is a freelance writer and journalist in the realms of entertainment, human interest and true crime history for over a decade. Cipollini has covered everything from community news to celebrities to organized crime through interview and narrative. Most recently, he has been added to the forum of ‘expert’ guest commentators for the Biography Channel documentary series “Gangsters: America’s Most Evil.” You can follow him on Twitter. And you can buy his book Diary of a Motor City Hit Man: The Chester Wheeler Campbell Story at Amazon.