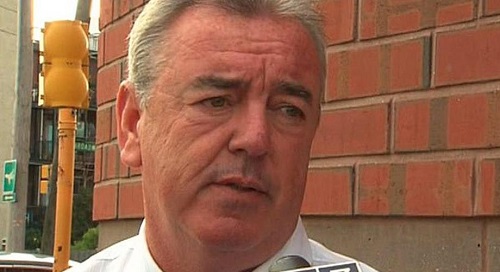 If only he’d kept his mouth shut. If he had done that then alleged New England Mafia associate Charles Lightbody (photo above) would’ve had a nice chunk of money and no legal problems. If only…

On Monday, Lightbody heard that a federal judge ruled that his financial interest in land scouted by Wynn Resorts Casino could serve as basis for fraud charges against him, the Boston Globe reports.

Charles Lightbody goes on trial next month on wire fraud charges together with codefendants Anthony Gattineri and Dustin J. DeNunzio. The three men are accused of hiding Lightbody’s financial interest in the property that was being scouted by Wynn Resorts Casino.

Wynn Resorts Casino was awarded the casino license by the state Gaming Commission after it was confirmed that Lightbody had sold his interest in the property. As a convicted felon, Lightbody was prohibited from benefitting from casino-related business. The sale price was also reduced from over $70 million to $45 million.

But then Lightbody began blabbing about the deal to a fellow mobster who visited him in prison. In that conversation, prosecutors allege, it became known Lightbody held a hidden interest in the land.

The two parties are expected to begin jury selection on April 11.

If this case makes one thing clear it’s that try as they might, the legitimate corporations and government will never keep their hands clean when they get involved in the casino business. It’s a dirty business. But the reward is worth getting your hands dirty for. The mob knew it and legitimate businessmen and politicians know it as well.