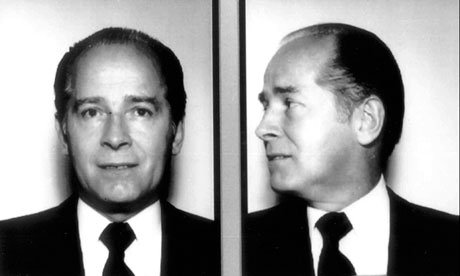 A U.S. Marshals Service auction selling off possessions of Boston crime boss James “Whitey” Bulger brought in a total of $109,295 yesterday. All items were found at the Santa Monica apartment where Bulger was found hiding in 2011 after being a fugitive for 16 years.

Though it might come across as a bit morbid to want to own Bulger’s mug shaped like a rat for $3,600 or the hat he was arrested in, currently on display in a museum, for $6,400, one should know that all the proceeds will go to the Boston mob boss’s many victims.

Mob buffs had a field day at the auction as they could bid for several of Bulger’s true crime books in which he scribbled notes. On page 16 of Patrick Nee's A Criminal and an Irishman, for instance, blue cursive writing titled “Omission” describes a warning that was left out. Part of a bundle of books, it eventually was sold for $1,900.

86-year-old Bulger is currently serving two consecutive life sentences for racketeering and 11 murders. His story fascinated the public and was the subject of many books and a 2015 motion picture titled Black Mass, starring actor Johnny Depp as “Whitey” Bulger.