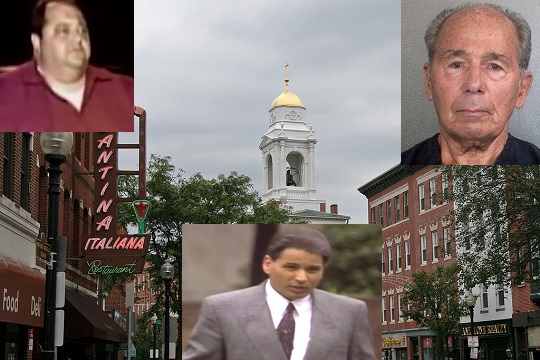 Never a dull moment in the Boston underworld. After barely surviving an internecine war and the beatings Whitey Bulger and the FBI dished out, the New England La Cosa Nostra family has been working hard to rebuild. This year, several top mobsters will hit the streets, raising the ever-pertinent question: Who’s the boss?

The most senior mobster on the list of possible candidates is 87-year-old Luigi “Baby Shacks” Manocchio, who was released from a federal prison in North Carolina last month and sent to a halfway house to prepare for his release. 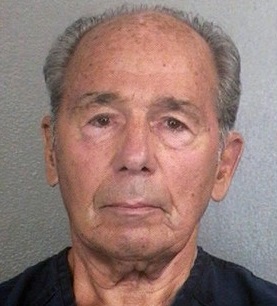 Manocchio (right) led the New England Patriarca Family until he was arrested in January of 2011 in a nationwide bust together with 127 other mobsters from crime families in New York and New Jersey. In 2012, he pleaded guilty to shaking down Rhode Island strip clubs for protection money and was sentenced to over 5 years in prison. His sentence will officially end in November.

Despite his old age, Manocchio can hold his own and remains a capable wiseguy. Boston mobster-turned-author Mark Silverman tells Gangsters Inc. that “he keeps his mind and body sharp. He's still in great shape, physically and mentally.” Adding, “Rarely will he see anybody other than his trusted friends, guys that have been around since the Angiulo brothers’ days.”

However, despite his cautious manner, he had even retired to Florida at one point, the Feds snagged him in 2011. That is partly why Silverman is certain Manocchio will say farewell to the mob life. “I’m sure he’s retired. He's paid his dues and deserves a little freedom for the rest of his golden years.”

With Manocchio out of the picture, for now – you can never count out an aging mobster – we focus on another Patriarca Family powerhouse. Carmen “The Cheese Man” DiNunzio (57) became a free man on February 19 of this year and has been at the peak of the New England Mafia’s hierarchy for around a decade. When Manocchio’s successor, Peter Limone, was sent to prison on bookmaking charges, DiNunzio stepped up to fill the position of boss.

Together with his younger brother Anthony DiNunzio (56), Carmen ran a tight ship. Author Scott Burnstein describes DiNunzio as “a wiseguy peacemaker, someone who favors mediation over violence unless totally necessary.” A retired FBI agent familiar with DiNunzio told Gangster Report, “Carmen’s more a racketeer than a gangster, he doesn’t get off on the blood and guts like a lot of guys that rise as high as he has.”

He did, however, run with plenty of gangsters who did get off on violence and intimidation. When he had a falling out with Jerry Angiulo, the family’s underboss at that time, after he allegedly shook down an Angiulo underling named Vincent “Dee Dee” Gioacchini, DiNunzio and his brother fled to the west coast where they worked with Chicago mobsters. One of the men they worked for was notorious hit man Anthony “The Ant” Spilotro. Portrayed by actor Joe Pesci in the movie Casino, Spilotro was beaten to death with baseball bats and buried in a shallow grave by Chicago mobsters in 1986. 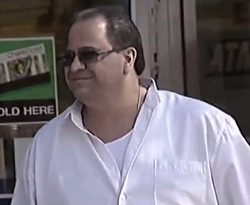 While, according to most sources, Spilotro’s violent streak did not rub off on “The Cheese Man”, it did, apparently, rub off on his brother Anthony. Caught on wiretaps Anthony DiNunzio (right) is heard issuing many threats. During a meeting with an associate at My Cousin Vinny’s restaurant in Malden in June of 2011, he made clear what would happen if anyone disobeyed him. “I get to watch you die in the ground,” he said (un)knowingly conjuring up images of Spilotro’s gory demise. “I stay there ten fuckin’ hours until you’re dead. And I’ll dig you back up and make sure you are dead.”

With the DiNunzio brothers on top, the Patriarca crime family was rumored to be able to put behind many of the beefs that originated during the internecine war that took place in the 1990s. Despite their success both men did not enjoy a long run.

In November of 2008, Operation Mobbed Up in Rhode Island took down 25 mob guys and associates out of Providence. Carmen DiNunzio was charged with extortion, gambling offenses, and charged with bribing an FBI agent. In the fall of 2009, he was sentenced to 6 years in prison.

Upon his brother Carmen’s imprisonment, Anthony took over as leader until he too went down in 2012 when the Feds charged him with racketeering and extortion. He is due to be released in February of 2018.

While both DiNunzios were behind bars, Anthony “Spucky” Spagnolo took over. It was the first time in the history of the Patriarca family that the boss was from East Boston. The Boston faction’s center of power was always based in the North End of Boston.

Interestingly, Spagnolo was at the center of one of the more recent disputes within the family. One of the men he had a beef with, Vincent “Dee Dee” Gioacchini, was the same man Carmen DiNunzio had shaken down back in the 1980s. Mark Silverman was in close contact with many Patriarca mobsters at that time and tells Gangsters Inc. what happened in Boston during the early to mid-2000s.

“A street beef between Anthony Spagnolo and the East Boston mafia street duo of Frederick “Freddy the Neighbor” Simone and Vincent “Dee Dee” Gioacchini had reached its boiling point,” he says. “The two East Boston gangsters had served lengthy prison terms and wanted their old territory back. Spagnolo, who had since been promoted to capo of the Day Square Crew, was not about to let that happen. In traditional mafia style, the two gangsters reached out to Manocchio to settle the dispute. Fearing another all-out mob war, Manocchio dispatched his Rhode Island lieutenant, Matthew Guglielmetti (below), to Boston for a sit down. State Police wiretaps placed in the kitchen of Simone picked up some very damaging conversations alluding to the fact that Guglielmetti would be killed if the peace could not be brokered. Guglielmetti tried to convince Simone and Gioacchini that Spagnolo would back off and allow them to earn in his territory. It sounded good, but the duo did not believe him.” 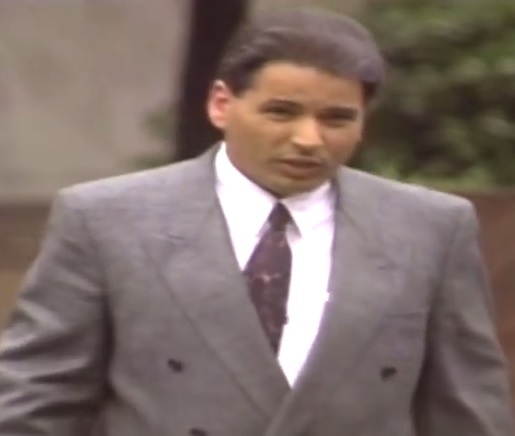 At that point, Silverman explains, they only had one option left: contact New York. That meant they sought help from the Genovese crime family. The Patriarca family had remained in frequent contact with the New York family for several decades. As authors Gerard O’Neill and Dick Lehr write in their book Underboss: The Rise and Fall of a Mafia Family, “[…] with New England divided along the Connecticut River. The Genovese family controlled such major cities as Hartford, Springfield, and Albany, while Patriarca had most of Worcester and exclusive control in Boston, Revere, and Maine.”

But despite the alleged advice from the Genovese family’s crew in Springfield, Silverman says, the beef continued. It wasn’t until State and Federal authorities arrested Simone and Gioacchini on extortion charges that it finally came to an end.

Spagnolo himself, meanwhile, was arrested in October of 2014 and charged with extorting $50,000 in protection payments from a video poker machine company located in Revere for the past seven years. (Read more about that bust in New England Mafia bust emphasizes mob’s decline) That means 400-pound Carmen DiNunzio (left) is the person out on the streets right now who is most eligible to be boss. With Manocchio presumably retired and 81-year-old Peter Limone semi-retired moving around behind the scenes, DiNunzio does not face much opposition.

Unless Manocchio’s trusted lieutenant, 65-year-old Matthew Guglielmetti, decides he wants to play a bigger role. Gugliemetti was released from prison last year after doing 11 years in prison on drug trafficking charges. Investigators alleged Guglielmetti pledged to protect a shipment of cocaine as it moved through Rhode Island.

Will there be a power struggle? Mark Silverman thinks not. The Patriarca family has learned from the war it fought in the 1990s: It’s bad for business and the freedom of its members. Still, you never know. “As of today, there has been some jockeying for position, but no clear cut leader has emerged,” Silverman says. “The once coveted position of boss now comes with price. According to Jeffrey Sallet, special agent in charge of organized crime in New England, the FBI will aggressively pursue their attack on leadership positions in New England organized crime.”

With the indictment of seven consecutive bosses the FBI has sent a clear warning indeed to anyone who might be interest in taking the crown. Besides, even if one becomes king is there still a kingdom to rule over? Are there enough knights to execute orders?

“I believe the mob is just as dangerous as it ever was,” Silverman says with confidence. “Today’s wiseguys have learned how to keep things quiet. The guys out there making noise are just gonna bring heat so they won't last long. People believe the cliché - there's strength in numbers - and that is true to a certain extent. In the mob it's more about talent. Guys who've been around know how to stay around and the guys that are a constant headache get dealt with one way or another. Naturally there is a power vacuum, but every high level guy knows that's just bait. I don't think you'll see another all-out fight for power. You may see some guys go down to prevent a repeat of the Salemme/Carozza war. The feds don't wanna clean up another mess like that - internally and on the streets.”

Gangsters Inc. wants to thank Mark Silverman for providing valuable information for this article. Silverman is the author of two bestselling nonfiction books, Marked Card and Rogue Mobster, which chronicle the Boston mob wars of the 1990s and early 2000s where over two dozen gangsters were killed over control of Boston’s underworld. Silverman writes about his personal experiences getting inside the mob and becoming an integral part of the war. Silverman’s books have been hailed as providing readers with the first inside glimpse into what went on at the street level, why people were killed, and what the stakes were. Silverman is a highly regarded public speaker who has made multiple media appearances. You can follow him on Twitter at @markymook

We also recommend our readers to check out the book Dirty Money by Joe LaFratta.