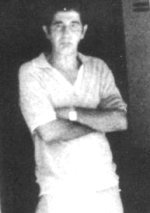 Benjamin 'Lefty Guns' Ruggiero was one of the true Cosa Nostra Mafioso, a guy who was old school and knew how Mafia politics worked. Lefty was a Bonanno soldier who was feared and respected by his fellow Mafioso and in the end Lefty showed them all, when he just wouldn't break Omerta. Most of you probably know Lefty from the movie "Donnie Brasco" in which Lefty was played by Al Pacino, it's a great movie but the truth gets tempered with for viewing pleasure. The following is the true story of Benjamin 'Lefty Guns' Ruggiero. 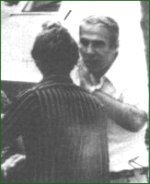 Lefty grew up just a few blocks from Little Italy and he never left. When he got older he moved into the apartment complex called knickerbocker village on monroe street a few blocks south of Little Italy. Lefty would soon be involved in criminal business and became connected to the Bonanno Crime Family. Lefty owned a social club at 43 Madison street where he would meet with other Mafioso and connected guys. One of those Mafioso who would drop by was Tony Mirra (picture on the right) a Bonanno Family soldier who would introduce Lefty to his friend Donnie Brasco. To Mirra and Lefty Donnie Brasco seemed an allright guy, something that would cuase them and their Family a lot of trouble later on.

Lefty had not served time in prison, he had been arrested many times for extortion and theft but had always beaten the rap. Lefty's only real problem was that he was a degenerate gambler. He even had to pay of his gambling debts before he could become a made man, it was delayed untill he had fully paid. But in the summer of 1977, when Lefty was in his early 50s, Lefty became a 'made' man in the Bonanno Crime Family. Lefty became a soldier under Capo Mike Sabella and would run the bookmaking operation for Bonanno Family Underboss Nicky Marangello. In his pre 'made' man years, Lefty Ruggiero had allready made a reputation for himself being a stone killer, clipping between 25 and 30 people. Lefty was the epitome of the wiseguy. He was at it 24 hours a day, scheming, on the street in wiseguy situations he was sharp and tough and that's what earned him a lot of respect from the other wiseguy's.

Lefty soon became close with Donnie Brasco, Lefty was old school and schooled Donnie Brasco in the ways of La Cosa Nostra. This created a problem between him and Tony Mirra, because technically Donnie belonged to Mirra. Donnie himself preferred being under Lefty and so the two themselves decided that they would say that Lefty was the first to 'claim' Donnie so that Mirra had no right to put Donnie under his wing. Offcourse Mirra wasn't having it and several sitdowns took place over the 'Donnie Brasco' situation. In the end Lefty won and Donnie Brasco was under him. Lefty liked Donnie a lot, seeing a good earner and potential 'made' guy. In the following years they would become very close and Donnie would pass up a certain percentage of money from all his schemes to Lefty. 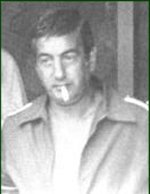 After some good years the Bonanno Crime Family was on it's way to a new Family war. On July 1979 then Bonanno Family Boss Carmine Galante was whacked, this shook up the entire Family and changed things drasticly. When Galante got whacked, Rusty Rastelli was appointed new Boss, he would run the Family from prison. Lefty's Capo Mike Sabella was demoted to soldier and his crew was taken over by Capo Dominick "Sonny Black" Napolitano (picture on the right). Lefty was sent for by Sonny Black and got the choice if he wanted to be under Capo Sonny Black or Capo Joe Massino, Sonny Black said he would like to have Lefty under him and Lefty agreed and became a soldier in Sonny Black's crew. But all was not well. The hit on Galante had divided the Family in different factions, one faction supporting Rusty Rastelli as new boss the other opposing, a Family war was on it's way. Sonny Black's crew was supporting Rastelli along with Capo's: Joey Massino, Sally Farrugia and consigliere Steve Cannone. Opposing Rastelli as new boss were Capo's: Caesar Bonventre, Philip "Philip Lucky" Giaccone, Dominick "Big Trin" Trinchera and Alphonse "Sonny Red" Indelicato. Lefty was getting ready for the orders and do what he was supposed to do as a soldier: kill.

Several times Lefty was ready to whack out a Capo from the other faction when he got orders to abort, they had a plan to whack out all the Capo's of the other faction in one clean hit. The three Capo's of the opposing faction were summoned to a peace meeting to patch up differences at a catering establishment. Inside the restaurant the three Capo's were whacked by Lefty, Jimmy Legs, Nicky Santora and Bobby Capazzio. No bodies were found. One of the Capo's of the other faction did not attend that 'meeting' because he was in jail, but Capo Caesar Bonventre had decided to come over to the Rastelli faction anyway. Later on one of the bodies was found by the police, it was a mistake by Joey Massino who was supposed to take care of making the body 'disappear', the bodies were supposed to be chopped up and thrown away. But eventough the body was found, there were no leads to whom might have killed him so the Rastelli faction did not worry.

All seemed well, finally, for Lefty and the Bonanno Family. The Family was at peace and business was back to normal. Untill one day when Lefty and Sonny Black were just hanging out in the social club and some F.B.I. agents came in. They brought pictures and a message: "Donnie Brasco (picture on the right) was an undercover F.B.I. agent". After a few moments the agents left leaving Lefty and Sonny Black stunned as they were trying to look for 'Candid Camera', at first they didn't believe it, they thought it was a trick to cause tension in a finally peacefull Family. But truth or not Sonny Black took measures and started making phonecalls. Every top Mafioso was briefed about the situation and at one point pictures of Brasco were sent to other Crime Family's so they could be on the look out. Being an old school Mafioso Lefty knew that this situation would end up getting him whacked, he had brought Donnie into the Family and he was close to him. Sonny Black also knew this would end in a negative way. And they were right.

Soon after Sonny Black was missing, the F.B.I. knew that dead wiseguy's weren't of much use during a trial and so on August 30 1981, they snatched Lefty from the street and arrested him while he was coming out of his appartment. There allready was a contract out on Lefty's life. Lefty was offered to enter the Witness Protection program if he would testifie, Lefty declined and was tried and later convicted to 20 years in prison. A big difference with the movie "Donnie Brasco" where we are left to assume that Lefty was 'sent for' and whacked, which in reality didn't happen. In 1992 after serving 13 years in prison because he would not break omerta, Lefty was freed and out on parole, living his life untill he died of cancer on Thanksgiving Day, 1995. On his deathbed, according to one old friend, Lefty threatened to spit in the faces of movie people who offered him $1 million to interview him for the Donnie Brasco promos. A very different attitude if you compare it to someone like Salvatore 'Sammy The Bull' Gravano who not only snitched and joined the Witness Protection program but also wrote a best selling book about his life, while he was setting up his multi million extacy drugring.

In his book about being undercover in the Mafia, Joseph D. Pistone a.k.a. Donnie Brasco quoted a conversation he and another undercover agent had with Lefty when they were undercover. In this conversation Lefty makes a great comment:

Undercover agent: "Lefty, I understand how we all like to make money. But what is the actual advantage of being a wiseguy?"

Lefty: "Are you kidding? What the....Donnie, don't you tell this guy nothing?
Tony, as a wiseguy you can lie, you can cheat, you can steal, you can kill people: LEGITIMATELY.
You can do any goddamn thing you want, and nobody can say anything about it. Who wouldn't want to be a wiseguy?".

And I think that's about it, Benjamin "Lefty Guns" Ruggiero was one of the few Mafioso whose life was in danger and on it's way to prison who abided by the rules which he lived by most of his life, not breaking omerta and taking it like a 'made' man, someone who didn't look for excuses or an easy ride, he was Cosa Nostra and he didn't stop because he could get whacked or sent to prison, he knew that that was what being a Mafioso was all about.

of 2 Next
This reply was deleted.