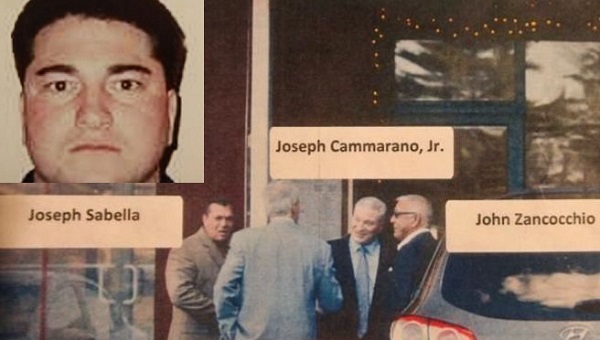 According to the New York Daily News, the high-level gangsters are named in a 16-page federal indictment that charged them “with a variety of charges, including conspiracy to commit murder, extortion and drug dealing.”

The indictment reads a bit differently, stating three counts: racketeering conspiracy; assault resulting in serious bodily injury in aid of racketeering, and aiding and abetting the same; and extortion conspiracy. Cammarano, Zanocchio, Sabella, Tropiano are each charged with counts one and three.

The drug dealing is not mentioned in the indictment as a separate count, but rather as part of a criminal activity the Bonanno crime family is involved in.

Bonanno family soldier Albert Armetta is charged with counts one and two. Prosecutors allege he beat up a victim to gain credibility with higher ups so that he could become a made man.

Cammarano Jr. was taking care of business for imprisoned boss Michael Mancuso, who allegedly approved his rise to the spot in 2015. Cammarano Jr. grew up in the life with a father who was once a Bonanno family underboss. He passed away in 2013 while doing time for murder. His son also got a taste of prison when he did 27 months for extorting a fellow Bonanno gangster.

Gangsters Inc. published a profile of Cammarano Jr. in 2016 and predicted that his new position as leader of the dysfunctional crime family would more than likely result in his downfall at the hands of the FBI. He faces 20 years in prison on each count.

The Bonannos have taken some big hits in the past decades, with two blows standing out.

The first was when they let an associate by the name of Donnie Brasco into its inner circle. Brasco turned out to be undercover FBI agent Joseph Pistone and sent scores of mobsters to prison – and a few to death at the hands of the mob.

The second blow came in 2003 when respected Bonanno family boss Joseph Massino decided to become a cooperating witness and rat out all his former underlings.