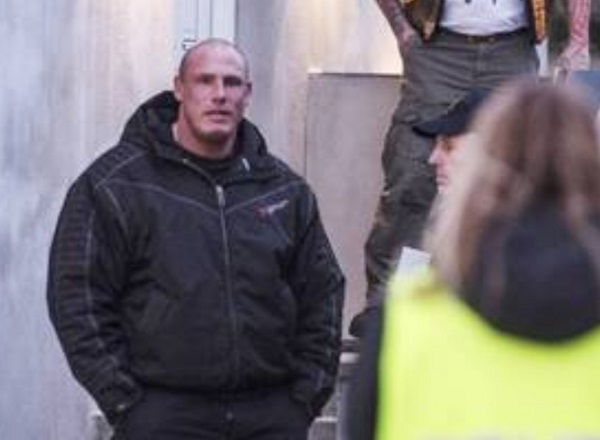 A president in the Danish Bandidos outlaw motorcycle club was sentenced to a total of 14 years in prison on Friday. 35-year-old Kristian “Biggie” Beck Hansen (photo above) led the Bandidos MC Westside chapter until his arrest in December of 2017.

Hansen had received a sentence of 2,5 years in March for trafficking 130 kilos of hashish after two underlings flipped and testified against him. They also told police how Hansen had ordered the attempted murder of a member of rival biker club Satudarah.

That hit occurred on November 13, 2017, when two masked men entered the biker’s apartment in the city of Næstved and fired six bullets into his arm, leg, and belly. The 25-year-old Satudarah biker was involved in the hashish trade and became a victim of a conflict between his own club and the Bandidos, according to testimony. Though heavily wounded, he survived the shooting.

One of the hitmen was later identified as 28-year-old Jim-Bo Poulsen. After the violent job, he was promoted from hangaround to prospect within the Bandidos chapter led by Hansen. The other shooter was never found, Danish newspaper Ekstra Bladet reported.

In March, Poulsen was found guilty and sentenced to 12 years in prison. Last Friday, the Danish jury found Hansen guilty of ordering the hit and sentenced him to 11,5 years behind bars. These will be added on top of drug sentence, making it a total of 14 years.

Hansen will appeal the verdict.

The Bandidos Outlaw Motorcycle Club was founded in Houston, Texas in 1966 by Donald Chambers, a Marine and Vietnam veteran. Since those early years the club expanded significantly and now has thousands of members spread out over chapters in 33 countries around the world, according to its website.

Its rise and expansion led to conflicts with other motorcycle clubs like the Hells Angels and local clubs in countries where the Bandidos try to plant a flag. Of course, the club doesn’t have to go abroad to find trouble. On May 17, 2015, the Bandidos were involved in a chaotic shootout at a Twin Peaks restaurant parking lot in Waco, Texas that resulted in the death of nine people and wounded eighteen.