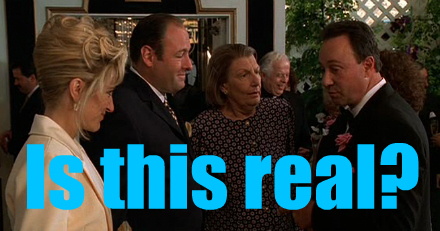 “Fuck you. Pay me.” You all know this line from the classic movie Goodfellas. In the movie a troubled bar owner asks Henry Hill and his mob superior Paul Cicero to become his partners so he falls under their protection and his business can flourish without harassment from other thugs. Things do not quite pan out like that though. Pretty soon, the bar owner, played by actor Tony Darrow, is drowning in debts and has to file for bankruptcy. There is nothing he can do about it. Like Henry Hill says in the movie: “Had a bad day? Fuck you. Pay me.”

It is safe to say an established actor like Tony Darrow, whose real name is Anthony Borgese, did some thorough research for the part. Looking to milk every human emotion out of his role, he probably imagined himself being the victim of extortion by the mob.

After his small role in Goodfellas, Borgese went on to play mobsters in numerous films and television series. He hit the jackpot when he played mob captain Larry Boy Barese in acclaimed series The Sopranos. In one decade, he had climbed the mob movie role ladder, going from extortion victim to mob capo. But apparently, Borgese had become confused about whether he was playing a role in a movie or if he was actually a mobster in real life.

On February 9, Borgese pleaded guilty to extortion conspiracy, saying: “I used extortionate means to collect a debt from a person who lived near Monticello”. The actor-turned-mobster was asked by a friend to help collect the debt. Several Gambino Family mobsters then lend a helping hand and beat up the extortion victim causing a broken jaw and broken rib. Borgese is expected to serve between 33 to 41 months in prison when he is sentenced.

But Borgese is not the only former cast member of The Sopranos to have had some legal troubles. This week, Lillo Brancato had a prominent role in the New York tabloids as he was involved in a prison fight. Brancato had a small role in the second season of The Sopranos playing mob wannabe Matt Bevilaqua. He is best known, however, for his role as Colagero in the movie A Bronx Tale opposite Robert De Niro and Chazz Palminteri.

Though Brancato certainly had his successes as an actor, things spiraled out of control when he started using heroin. As more acting parts passed him by and his money started disappearing with every needle shot, he soon found himself involved in a burglary. When a police officer caught him and an accomplice, Brancato’s friend shot the cop. In 2009, a judge sentenced Brancato to 10 years in prison for his role in this very real criminal caper.

The New York Post exclusively reported this week how Brancato apparently had not learned from his mistakes. While standing in line to use the prison’s phone, Brancato felt he had waited long enough and jumped the inmate in front of him. As is common nowadays with famous and somewhat famous people who are locked up, soon the story ends up on the cover of some tabloid or gossip show. This case is no different. The beat up inmate told The New York Post: “He thinks he runs the place, like he's God's gift to this earth. He tells me, 'Hang up the phone! I gotta use the phone!' He forces open the door and spits at me, and he's punching me in the face and on the head. “ He also adds that Brancato has “got this fetish with the Mafia. Maybe it's the roles he played in the past. He's got this persona like he's acting like he's in the mob.”

“A fetish with the Mafia.” Ever since the release of the classic motion picture The Godfather, a lot of people on both sides of the law have had, if not a fetish then certainly, a fascination with the Italian Mafia. The film told the epic story of a family. Anyone could relate. And the criminal aspect of the family came across as a somewhat respectable way of making a living. Just because it looked so good. With such a strong moral code. Despite all the killing of course. 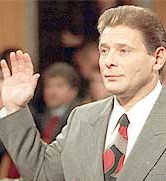 Mob turncoat Salvatore “Sammy the Bull” Gravano (right) vividly remembers the day he saw Francis Ford Coppola’s masterpiece: “I left that movie stunned. I mean, I floated out of the theater. Maybe it was fiction, but for me, then, that was our life. It was incredible. I remember talking to a multitude of guys, made guys, everybody, who felt exactly the same way. And not only the mob end, not just the mobsters and the killing and that bullshit, but that wedding in the beginning, the music and the dancing, it was us, the Italian people! The mob end was so on the money, it was crazy. It was basically the way I saw the life.”

With The Godfather painting such a flattering picture of ‘the life’, it wasn’t difficult to guess why so many mobsters became enamored with the film. But one of its actors became very close to one mobster in particular.

Actor James Caan played the volatile Sonny Corleone, heir to the throne, but most of all a hotheaded trigger happy mobster. And the gangsters loved him for it. In 1972, Caan became very good friends with Andrew Russo (left), who went on to become Acting Boss of the Colombo Crime Family and was arrested in the largest mob bust in FBI history in January of this year. At Russo’s bail hearing, a letter from Caan was read: “I've known Andrew since 1972 and in all that time I have known him only as an unbelievable father, grandfather, great-grandfather and as good a friend as any person could ask for.” The two men are so close that Russo even is godfather to Caan’s son Scott who is currently enjoying success with the television series Hawaii Five-0.

Regardless of what one thinks of such a friendship, the fact that mobsters and the actors portraying them on screen are this close and are active in each other’s backyard is very interesting. When The Godfather was released, the line between mob fantasy and reality seemed to disappear within decades. Mobsters wanted to become famous actors, while actors wanted to hang with mobsters and have a taste of real danger. After reading the recent news articles it is obvious that a few actors went a bit too far with their walk on the wild side.