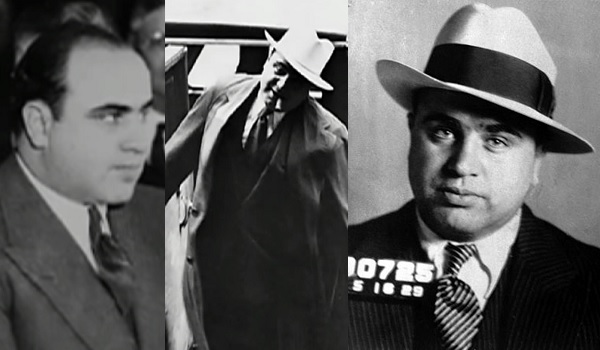 The Prohibition era in Chicago has gone down in history as a time of extreme mob violence. A time when hoodlums were mowing down enemies with Thompson machine guns in a battle over the lucrative bootlegging business. When mob boss Al Capone ruled supreme while being on the cover of every newspaper. Author John J. Binder gives readers a complete account of those turbulent times in his new book Al Capone's Beer Wars: A Complete History of Organized Crime in Chicago during Prohibition.

“It’s a book to set the record straight,” John J. Binder tells Gangsters Inc. right off the bat. Al Capone’s Beer Wars is based on over two decades of exhaustive research by the renowned mob historian and several of his colleagues that covers the entire period from 1920 to 1933.

In it, he paints a detailed picture of the Chicago Outfit from its beginnings under leader “Big Jim” Colosimo to its prolific rise under bosses John Torrio and Al Capone. Using many previously unexplored sources Binder lays out how the organization’s diversified operations in vice, gambling, narcotics, and labor racketeering enabled its expansion and ensured its survival after Prohibition ended.

Another reason the Capone gang was so successful was that it welcomed gangsters from other ethnicities into its ranks. “Therefore,” Binder writes in his book, “from the earliest days [they] greatly benefitted from the likes of Jake Guzik and Murray Humphreys and readily embraced other non-Italians such as Sam Hunt and Willie Heeney. Capone was also willing to cooperate with and eventually merge with other gangs as things evolved, as opposed to fighting them and then expelling them from the areas they controlled, even though these other gangs were not heavily Italian in membership.”

ARE YOU KIDDING ME?!

One should add that all of this reasoning is based on decades of research. Part of the reason for writing this book stems from the large amount of crime fiction that is being presented as fact by many writers. “A lot has been written about this subject, which I’ve been studying for 25 years now,” Binder tells us. “I’ve had the opportunity to dig into a lot of things. And as other books came out I’d sometimes be perplexed.”

Flipping through the pages, Binder found himself asking: “Really? How could you say that? How do you think that happened?” Or, he adds, “When one guy says X and 99 other sources say Y yet the author, without anything else to contribute to this issue, goes with X. Come on! You’re kidding me?!” he exclaims.

There are many reasons for this, he explains. “One problem is that in this day and age sensationalism sells books. I think a lot of authors might be a bit too quick to go with something that they hear or can put together quickly, especially if it is very sensational.” This sensationalism, Binder says, led to the creation of myths and fiction like the claims that Capone was a cocaine addict (he wasn’t) or that Capone had nothing to do with the St. Valentine’s Day massacre (he did).

A bit frustrated by this and realizing he had compiled a ton of factual evidence about the Prohibition era in Chicago, Binder went to work on his latest book. A major focus of his work is how the group led by Al Capone gained a virtual monopoly over organized crime in northern Illinois and beyond even though it was just one of a staggering twelve major bootlegging gangs vying for territory at the start of Prohibition.

When it comes to researching organized crime, Binder has simple advice: Dig deep and dig wide. “Working this subject is so difficult,” he admits. “You’re talking about a field of history where you have minimal source material. You think the Middle Ages are bad? Organized crime history is much worse.”

What helps is cross checking every lead you find, Binder advices. “If you’re not careful of the source material you draw conclusions that might be very different than if you’d dig a little deeper.”

“The history of Chicago prohibition and most of organized crime has been written about in a very particular way,” he tells us. “Most writers are not looking at the bigger picture, asking: What do these guys do? How do they make their money? Because that’s the sole goal of organized crime.” Instead, Binder says, the media focused on the violence.

During his meticulous research Binder partnered with Mars Eghigian and decided to take a look at all of these 729 killings one by one, devoting an entire chapter to the topic in his book. After painstakingly going through reports and historic documents the results were in. Of the 729 killings between 1919 and 1933 only 138 people were members of the major bootlegging gangs.

Binder: “The flashiest incidents [during Prohibition] were, yes, with the Thompson submachine gun, but that doesn’t mean it was used regularly. Let’s go look at all these incidents and see in what percentage a Tommy gun was used.”

In 444 murders between 1926 and 1933 the Thompson machine gun was used a total of only 27 times. “There is a simple reason why they used them infrequently; when fired on full automatic such weapons are difficult to control and the gangsters were extremely wary of accidentally hitting bystanders. To minimize the risk, gunmen tended to shoot their victims at close range, in which case a handgun or shotgun was sufficient.”

Binder: “That chapter more than any other shows what the work was really all about: Let’s get to the facts here. Virtually every conclusion I’ve seen previously drawn about gangland violence in Chicago during Prohibition is pretty much wrong.”

“AL CAPONE WAS A GREAT BOSS”

One man who has gotten a particularly bad rep is crime boss Al Capone. Described frequently as a hothead with little in terms of brain capacity, readers had to ask themselves: how could this guy be boss?!

“In my opinion,” Binder begins, “Al Capone was a great gang leader. He had strong business sense and excellent martial skills. They’re running a multimillion-dollar business empire. Illegal as it is, that is the sole goal. If you can’t earn profits and make money for everyone, you won’t last very long. Guys underneath you are probably going to revolt, because you’re not just damaging how much guys at the top make but also how much everyone makes. I don’t think anyone would last very long as a gang leader if he didn’t have some basic and decent business skills to run the operations.”

Apart from that, Capone could never have lasted, Binder says, if he wasn’t able to keep his aggression under control. Not just because it would cloud his judgement and result in hasty and bad decisions, but also because he would alienate others. “You have to be diplomatic in how you interact with people inside and outside your organization,” he adds.

Of course, he did have his shortcomings. Binder acknowledges that Capone’s public behavior put him in the spotlight and that he should have filed his income tax returns every year and declared income equal to what he thought the authorities could attribute to him.

After extensively researching this fascinating period, what have we learned from Prohibition with regards to fighting organized crime? Well, you might not like the answer.

“The basic law enforcement approach is someone breaks the law and you punish him,” Binder says. “The next approach is, as you saw in Chicago, authorities would try to hit them in the pocketbook. Shut everything down in a certain area so they lose income and start behaving themselves. Or if it’s really bad, something really major, authorities will shut down organized crime citywide for two weeks. Maybe keep hitting the speakeasies and gambling places and keep them totally closed to really punish the gangster element.”

But you hit organized crime the hardest if you take away their livelihood altogether. Binder: “Make their activities legal. If you do that, you put them totally out of business. Legal casinos and legal slot machines have taken illegal gambling largely away from the Chicago Outfit.”

If we apply that theory to our present-day predicament, it would mean legalizing drugs. “Complete legalization of drugs would take it away from the street gangs who are involved in a lot of the violence on the street corners and from those at the upper ends distributing and trafficking it. I’m not trying to use that as a blanket statement, saying there’s your conclusion, let’s do it.  Society would have to weigh the benefits against the costs. People always argue about the cost and that it will create more addicts, more crime, but it would certainly have a positive effect as all that violence would probably disappear. The corruption of public officials with drug money would go away. The government could tax the narcotics trade and make it a revenue baring activity for society,” Binder argues.

“We learned from Prohibition that the racket quickly ended when authorities legalized alcoholic beverages again. The bootlegging gangs tried to go legit, but found they were bad at it. When they’re forced to deal with a legal competitive environment they get their pants kicked off. When alcohol became legal they tried to hold on but it was very clear that they had become ancient history as far as the booze business was concerned.”

John J. Binder, Ph.D., is the author of two previous books on organized crime and has appeared in interviews on and served as an expert consultant for documentaries on the mob shown on the A & E and AMC cable networks and on the Discovery Channel and the History Channel. He has also given numerous interviews on the subject for newspapers, magazines, and radio and television news programs. He lectures frequently on organized crime in Chicago. He is associate professor emeritus of finance in the College of Business Administration at the University of Illinois at Chicago.