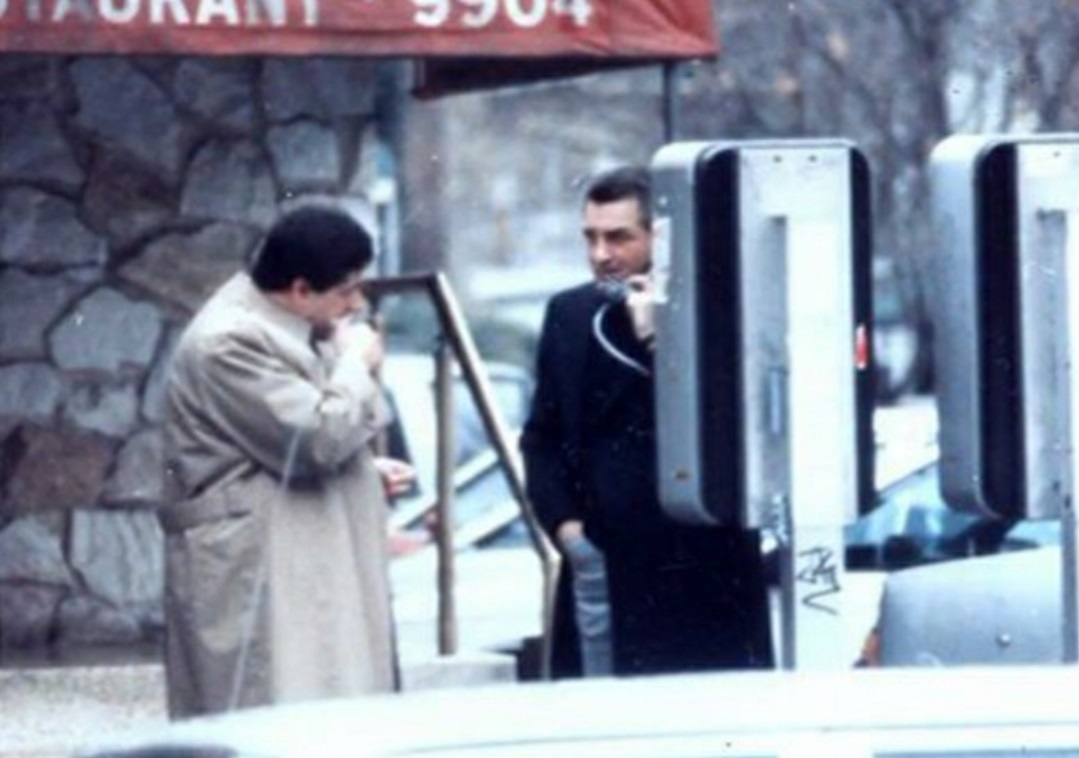 Mobsters and payphones formed a decades long lucrative partnership. Conducting business on one of those things was part of their modus operandi. It was a way of avoiding wiretaps, while still getting to talk to associates far and wide. Unfortunately, the mighty payphone collected its last coin this week.

On Monday, the last standing public payphone in New York City was removed from a Times Square street. Its removal is the final step in the city’s project to replace all outdated technology with kiosks that offer free WiFi and mobile charging. The smartphone has officially won the war.

For decades, the payphone was the essential tool for any mobster, gangster, hoodlum, gangbanger, and drug dealer to conduct business in a relative secure manner. It was made iconic in movies such as Goodfellas and Casino and television shows like the The Sopranos and The Wire.

Though, in these last two, technology had already started its brutal assault on the old school coin-operated communication tool.

Payphones might have a reputation for making it possible to communicate in relative anonymity, but Mafiosi weren’t stupid enough to believe the law wasn’t listening in on their payphone conversations. That is why they would use code words to talk to their friends and colleagues.

This sometimes got quite elaborate. Like in the case of the Sicilian mobsters involved in the heroin pipeline known as The Pizza Connection. They discussed the quality and price of heroin and cocaine in Sicilian while using code words related to t-shirts.

“I think that by the beginning of next week they will come with 22 parcels or with 11 parcels, whatever you guys prefer,” Sicilian Mafia boss Gaetano Badalamenti, allegedly calling from Brazil, said in one telephone call in 1984.

“All right,” Sicilian drug trafficker Salvatore Mazzurco (pictured below) answered in a wiretapped phone booth on a street corner in front of a pizzeria in Queens. 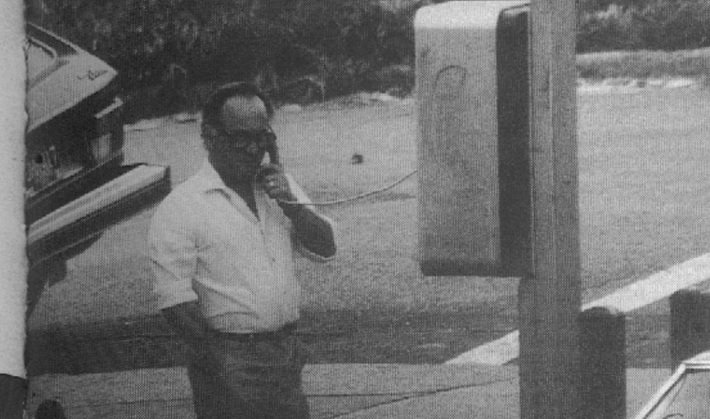 Badalamenti: “Now there's another thing, I met the guy with the shirts of four years ago. But there's a little problem. But there is another guy here that has -there's 10 percent acrylic. I understand little about this.”

Badalamenti: “It's not, it's not pure cotton. The cost over there will come to 60 cents. Whereas the other one will come to more than 90 cents.”

Mazzurco: “The one that is pure cotton.”

Mazzurco: “All right. I will give you an answer regarding everything tomorrow.”

Badalamenti called again the next day to the same number and asked: “Should I send two shirts?”

“You can send all that you want,” Joseph Lamberti (talking on the phone in the photo below, Mazzurco nearby), another Sicilian mobster, answered. “I'll send you two shirts,” Badalamenti said. “The guy, who is more experienced than I, told me it is good, he says. There's simply 10 percent acrylic - acrylic.”

“Well,” Lamberti said, “I think that the one from over there is not, is not a problem. I think that we can go on as far as possible.”

From the Sicilians to the Americans, from Capone to Whitey Bulger

In this case, the Sicilians used the payphones to conduct an international drug operation spanning multiple nations and cities. American wiseguys gladly participated in the profitable scheme. Men like New Jersey mobster Frank Polizzi, shown below next to Sicilian drug trafficker Joe Ganci while standing in front of a payphone. 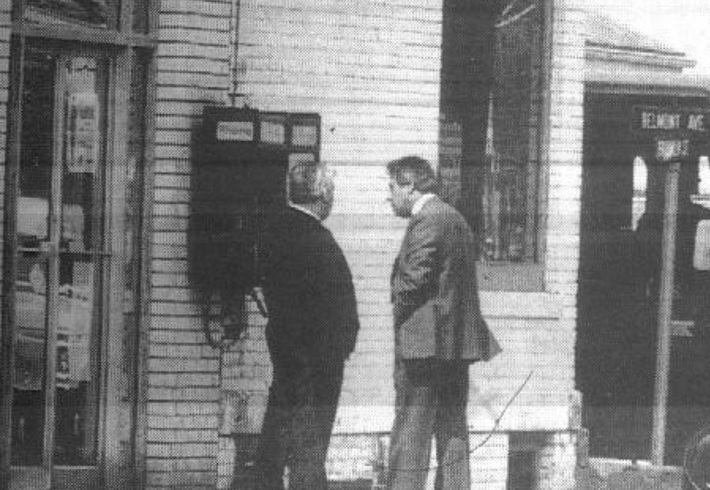 Most American mobsters, though, used payphones to handle business much closer to home. Lucchese crime family bosses Vic Amuso and Tony Casso can be seen below making a call. No doubt someone died just seconds later. If not, then the person on the other end of the line was whacked the next day for failing to murder the person ordered whacked the day before. 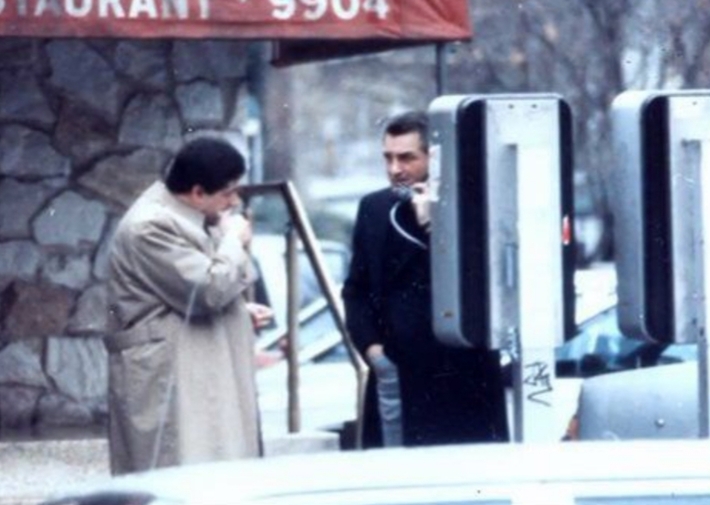 Boston crime boss Harry “Doc” Sagansky was bigtime into illegal gambling and accused of being a part of a multimillion-dollar number pool and horse race racket in 1943. His activities were even investigated during the Kefauver hearings into organized crime in 1950. Colombo crime family associate Larry Mazza dialing in to see to some business. Whether that was arranging a hit for his capo, Greg “The Grim Reaper” Scarpa, or making a date with Scarpa’s common-law wife, who knows? 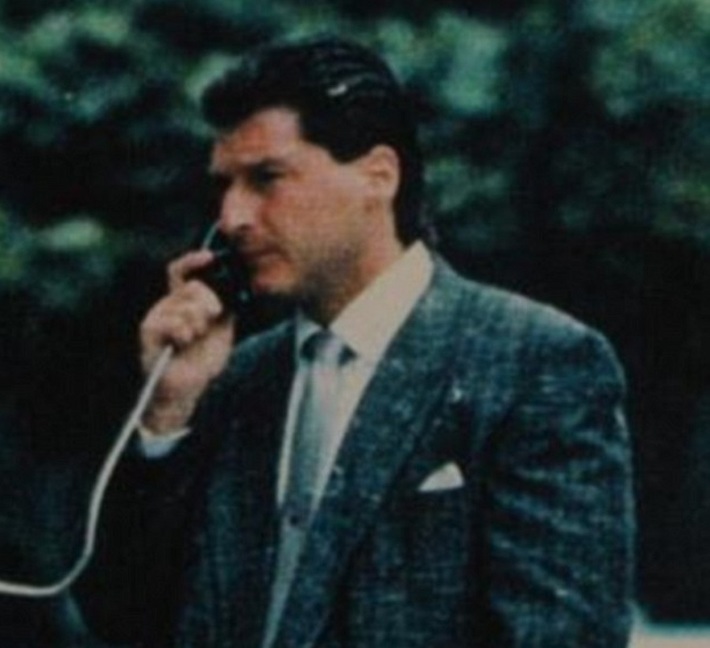 Back in the mob’s good ol’ days phone booths were high tech. Chicago Mafia boss Al Capone had one installed at the Four Deuces, his headquarters in downtown Chicago. It can now be viewed at the Mob Museum in Las Vegas. Capone bodyguard and hitman “Machine Gun” Jack McGurn can be seen below exiting a phone booth in Chicago after making a call. Just a chat with some broad or setting up a deadly hit? 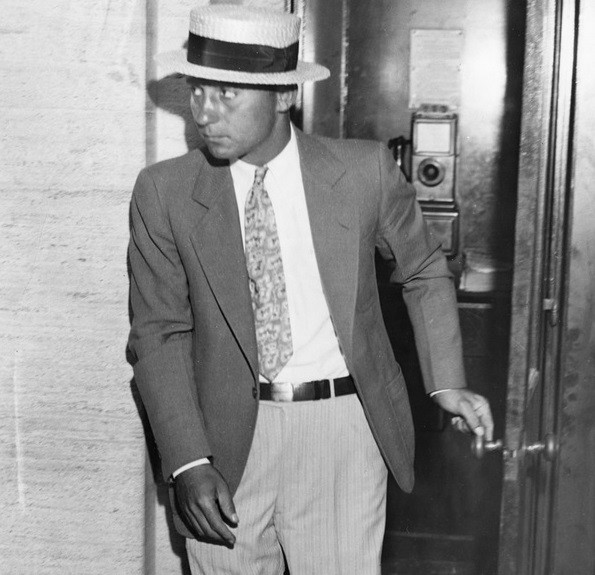 Because setting up a gangland assassination was easy using the payphone. Not just for ordering a gunman to go out and shoot someone, but also to lure a hapless victim to a location that was wide open.

You know you have to watch your step when someone nicknamed “Mad Dog” is coming after you. And Vincent Coll definitely earned the nickname. Back in the 1920s and early 1930s, he painted New York City red with blood.

His deadly skills were put to good use by mob boss Dutch Schultz. Taking a life gives some people a godlike feeling. Like they are capable of anything. In Coll’s case, he felt that after several years of taking orders from Schultz, he would be better off giving orders instead of taking them.

So, he went to war with Schultz. His lunacy caused many deaths and wreaked havoc on the city. In 1932, everyone had had enough of Coll. His end came on February 8 at 12:30 am when Coll was using a phone booth at a Manhattan drug store.

While on the phone, Coll was riddled with 15 bullets by a mob hitman. He died on the spot.

It is believed he was set up by his underworld enemies. 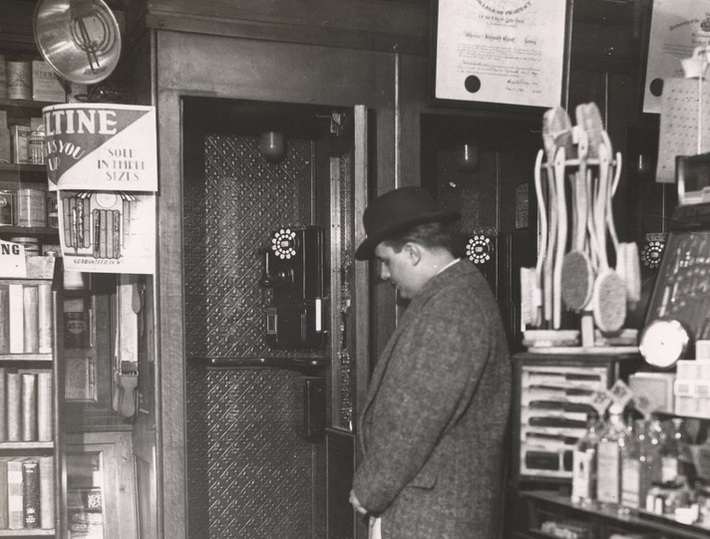 What worked like a charm in 1932, continued to do so in 1975. This time it was the Irish mob in Boston that used the payphone in a murder plot. Their target? Edward Connors, a bar owner and former boxer who ran his mouth about a gangland murder. Loose lips sink ships and the underworld doesn't take too kindly to them. Connors fate was sealed.

Boss Howie Winter sent word to Connors that he wanted to talk about the situation and told him to give him the number of a safe payphone so they could talk.

Unbeknownst to Connors, Winter and his men ran the number and traced its location. Winter and Connors had agreed to call at a certain time so Winter’s hitmen - John Martorano, James “Whitey” Bulger and Stephen Flemmi - knew where to find their target: outside a gas station in Dorchester.

When Connors arrived at the payphone on June 12, 1975, he was greeted by Bulger and Flemmi who were armed with a shotgun and automatic carbine rifle and shot up the phone booth with Connors in it. He died on the spot. To finish this story off and give the payphone the sendoff it deserves, we leave you with these two classic scenes from Goodfellas. Enjoy.

Now shut it down, Jimmy.