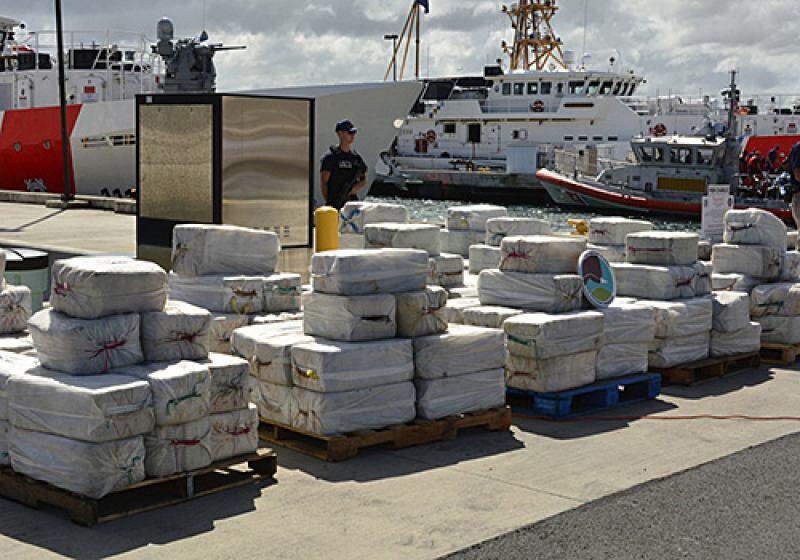 The flow of drugs continues unabated. Despite the War on Drugs and despite the hard work by honest law enforcement agencies, it is said that only 10 percent of the shipments of narcotics are intercepted by authorities. Gangsters Inc. tries to keep track of these seizures and lists (some of) them below.

List is updated periodically and only contains seizures of over 100 kilograms of narcotics.

Venezuela: Venezuelan armed forces seized 2,800 kilograms of marijuana, they reported on September 5. The shipment was aboard a vessel departing from Colombia heading to the island of Martinique.

Costa Rica: Authorities in Costa Rica seized 2500 kilograms of cocaine and 3100 kilograms of marijuana in the port of Moín in Limón on September 3. The shipment was destined for Antwerp, Belgium.

The Netherlands: Dutch Customs seized 3000 kilograms of cannabis hidden in a shipment of coconuts from Nigeria, authorities reported on September 1.

United States: U.S. Customs and Border Protection, Office of Field Operations officers at Laredo Port of Entry seized 325 kilograms of cocaine at the World Trade Bridge when a CBP officer referred a 2009 International tractor hauling a shipment of furniture for a secondary inspection on August 30. That same day, another seizure also occurred at World Trade Bridge. CBP officers referred a tractor trailer hauling a shipment of steel rolls for a secondary inspection and found 122 kilograms of cocaine.

The Netherlands: Dutch Customs seized 1533 kilograms of cocaine in the port of Rotterdam on August 30. The bricks of coke were in sporting bags hidden within a load of apples. The shipment arrived from Panama.

United States: Agents of the Rio Grande Valley Sector Border Patrol and of the Brownsville Border Patrol Station seized over 170 kilograms of marijuana in two separate smuggling attempts on August 27 and August 28.

United States: U.S. Customs and Border Protection seized almost 700 kilograms of cocaine hidden in a load of baby wipes inside a truck crossing the border at the Colombia-Solidarity Bridge on August 26.

The Netherlands: Divers of Dutch Customs discovered 150 kilograms of cocaine hidden under a ship in the port of Amsterdam during a routine check on August 17. The shipment was sent from Brazil.

Ecuador: Two shipments of cocaine totaling 3500 kilograms were seized in the past several days in Ecuador. Both loads were hidden inside trucks headed to port cities. One truck headed for Guayaquil contained a shipment of 2300 kilograms, while the other was filled with 1200 kilograms.

The Netherlands: Dutch customs seized 300 kilograms of cocaine on August 11 at the port of Rotterdam, the Netherlands. The shipment was hidden in a container filled with fishmeal. It was shipped from Chile.

Bonaire: The Dutch Navy intercepted a vessel near the island of Bonaire on August 10 and seized 450 kilos of cocaine and 100 kilos of marijuana. That same day, the Dutch Coast Guard got a report about other suspicious vessels nearby. One ship was refueling another ship. On one of those ships authorities discovered 2300 kilograms of cocaine.

United States: U.S. Customs and Border Protection officers from the Otay Mesa Port of Entry found around 395 kilograms of cocaine and 18 kilograms of fentanyl concealed within a shipment of heavy machinery gears inside a 2009 Freightliner truck on August 5.

Curacao: The Dutch Navy intercepted a go-fast boat near the island of Curacao in the Caribbean on August 4. Five Venezuelans were arrested and 1 ton of cocaine was seized.

Guinea-Bissau: Guinea's navy and military police have seized about three tons of cocaine they found hidden on a ship anchored in Guinean waters, they said on August 4. “Two shipments of drugs were seized,” Navy captain Mamadou Yaya Diallo told Reuters.

Belgium: Belgian Customs at the port of Antwerp seized a shipment of 372 kilograms of cocaine on August 3. The coke was hidden inside a shipment of sugar shipped from Brazil.

Mexico: Mexican marines seized more than a ton of cocaine from a boat discovered off the coast of Michoacán, the Navy announced on August 3.

Belgium: Customs at the port of Antwerp discovered 734 kilograms of cocaine on July 29. The shipment was hidden among bags of sugar. It was sent from Colombia.

Great Britain: Officers seized over 500 kilograms of cocaine on a boat travelling from Colombia, at London Gateway on the Essex coast, south-east England, the National Crime Agency (NCA) said. Investigators intercepted the shipment, which had been on its way to the Netherlands, on July 26, 2022. The coke was wedged alongside bananas in cardboard boxes.

Australia: Australian Border Force officers found 700 kilograms of cocaine on July 22 while inspecting containers on the vessel Maersk Inverness at Port Botany in Sydney. Forensic examination identified different emblems on the bricks, including the numerals 5 and 365 and the word Netflix.

Dominican Republic: The National Directorate for Drug Control reported on July 17 that together with the Navy had seized 337.12 kilograms of cocaine on the coast of the province of Barahona.

U.S., Los Angeles: The U.S. Drug Enforcement Administration (DEA) seized approximately one million pills laced with fentanyl allegedly linked to the Sinaloa Cartel on July 5, 2022, in what authorities say is the biggest bust for the drug in California history.

U.S., San Diego County: Over 2 tons of methamphetamine were seized in July after authorities in San Diego County tracked and intercepted a truck that crossed the US border from Mexico.

U.S., New York: A court authorized search of an apartment in the Mount Hope neighborhood of the Bronx on June 27, 2022, resulted in the seizure of approximately 110 kilograms of heroin, fentanyl and cocaine, plus 50 pounds of a substance believed to be crystal meth and up to 75,000 counterfeit pills believed to contain fentanyl.

Colombia: Authorities in Colombia seized a shipment containing 1,000 kilograms of cocaine that was disguised as potatoes and frozen chips.

The Netherlands: Customs officers in Rotterdam, the Netherlands intercepted 1,099 kilograms of cocaine during a check in the port of Rotterdam on April 25. The drugs were hidden in a banana shipment from Ecuador.

Great Britain: Over 3.7 tons of cocaine hydrochloride, hidden in boxes of bananas in a container of 20 pallets of the fruit, were seized by the British Border Force at Southampton Docks on March 17, 2022.

Montenegro: Montenegrin police on January 12 seized more than 400 kilograms of cocaine in the capital, Podgorica, after workers in the Voli retailer company’s warehouse found the packages hidden in a banana shipment.

Great Britain: Border Force officers found 103 kilograms of cocaine on January 6 while searching a vessel that had arrived at the Port of Southampton. The drugs were hidden in a shipment of bananas from Colombia.

Canada: In early January, more than 1.5 tons of cocaine was seized by border services officers in Saint John, New Brunswick, following a sophisticated drug smuggling investigation by the CBSA and RCMP. The narcotics were discovered concealed inside the cargo of a marine container.

Oman: HMS Montrose, a British Royal Navy ship operating as part of the Combined Maritime Forces, seized over 1 ton of illicit drugs in the Gulf of Oman. In an operation lasting almost 10 hours, a team from the warship boarded a suspect in international waters off the coast of Oman and seized 663 kilograms of heroin, 87 kilograms of methamphetamine and 291 kilograms of hashish and marijuana.

Great Britain: 1.2 tons of cocaine were seized at the port of Kent on December 20. The shipment had arrived in the United Kingdom from Costa Rica and was found in a banana shipment during an armed raid at the Kent port.

Australia: Australian police seized 450 kilograms of heroin inside a sea freight container of ceramic tiles sent from Malaysia and addressed to a Melbourne business. It is the largest heroin shipment ever detected in the country (up to this date).

Laos: Police in Laos intercepted a truck carrying 55 million methamphetamine tablets and more than 1.5 tons of crystal meth. It was the biggest single drug seizure ever recorded in Asia, according to the United Nations.