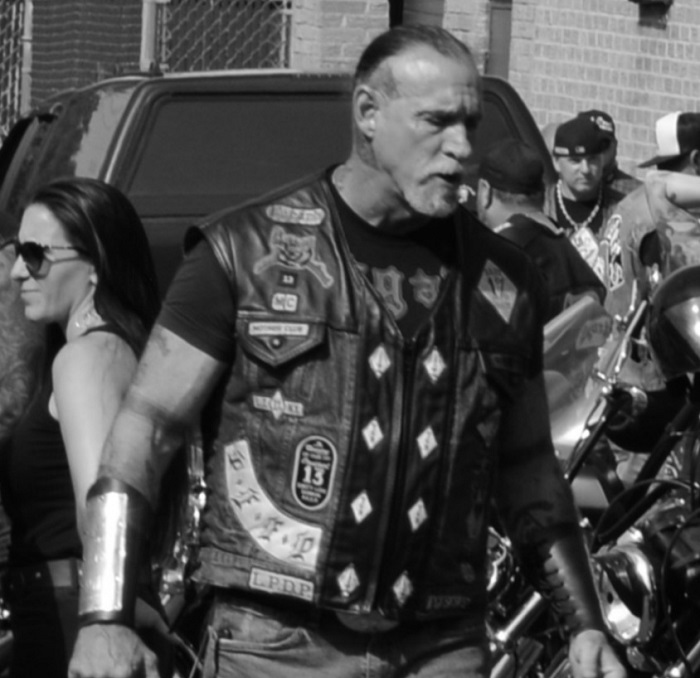 The Pagans Motorcycle Club is feeling the heat as several of its members face serious charges, leading some to admit guilt. This week the club’s national leader pleaded guilty to a gun charge.

On Wednesday, Keith “Conan” Richter (photo above), the 62-year-old president of the Pagans Motorcycle Club, pleaded guilty by videoconference to one count of possession of a firearm by a convicted felon. The charge stems from a party the Pagans held in February of this year in Lancaster, Pennsylvania.

While Richter was traveling from the party to his home in Suffolk County, New York, law enforcement pulled the vehicle over in Mercer County, New Jersey. They recovered a loaded Ruger P345 .45 caliber handgun from a front-seat compartment in the vehicle. As a result, they obtained a warrant for Richter’s arrest, which was executed on February 26, 2021.

It wasn’t the first time Richter got in trouble. He was previously convicted of much more serious offenses, including conspiracy to commit murder and aggravated assault in aid of racketeering, for which he served 16 years behind bars. He now faces a maximum sentence of 10 years in prison and a fine of up to $250,000. He is scheduled to be sentenced on December 3, 2021.

Large-scale drug trafficking with the Pagans

Last week, on July 23, 44-year-old Jason Evans pleaded guilty to drug and gun charges. He was identified as a member of a large-scale drug trafficking operation, responsible for trafficking cocaine, methamphetamine and heroin, in Pennsylvania and Ohio. The investigation was the result of the efforts of the Greater Pittsburgh Safe Streets Task Force, led by the FBI, to “identify the criminal activity, including drug and firearms trafficking, of individuals who are members and/or associates of a violent, outlaw motorcycle gang known as the Pagan’s Motorcycle Club”.

The investigation began in January of 2020, and beginning in August of 2020 and continuing through November 2020, the FBI conducted a federal Title III investigation, which resulted in the interception of thousands of wire and electronic communications over a total of ten telephones, including Evans’ co-defendants Bill Rana and Eric Armes, both members of the Pagans Motorcycle Club.

Evans, although not a member of the Pagans, was a close associate of Rana’s, who was a “fully patched” member of the Pagans and Sergeant of Arms for the Pittsburgh Chapter. Rana is charged in both counts of the conspiracy and his telephone was intercepted for approximately 90 days. Investigators also obtained search warrants for Rana’s Facebook account, which provided law enforcement with many inculpatory communications, conducted controlled purchase of controlled substances, as well as conducted physical and electronic surveillance of among others, Evans.

During a raid and search of Evans’ residence on December 8, 2020, law enforcement seized approximately 10 ounces of cocaine as well as two firearms, ammunition, magazines, and over $10,000 dollars in cash. Because Evans, a convicted felon, is prohibited from possessing firearms and ammunition, he also pled guilty to another charge related to the firearms. His sentencing is scheduled for December 2, 2021.

The Pagans Motorcycle Club is involved in a war with rival club the Hells angels, which resulted in several violent and deadly clashes. A Pagans president was shot to death in broad daylight in the Bronx in May of 2020. Several Hells Angels have been charged in that killing.

At the beginning of this month, several Pagans leaders and members were charged with racketeering and the 2018 assault of an associate of the Hells Angels at a gas station in Newark. The beating was caught on camera.

Underworld factions always fight for dominance, but that dominance isn’t worth much when everyone is locked up in prison.