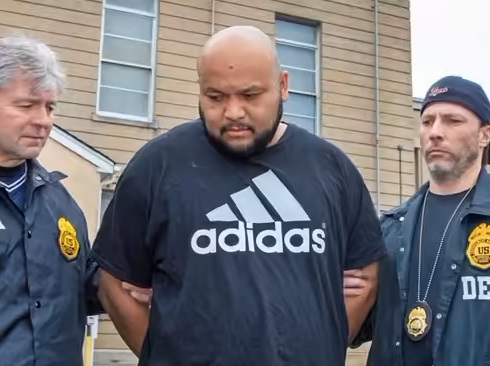 A leader of an MS-13 gang operating in Maryland was sentenced to life in prison on Friday. El Salvadorian national Miguel “Reaper” Angel Corea-Diaz (photo above) had been found guilty of racketeering and murder conspiracy on November 23, 2021 after a four-week trial.

41-year-old Corea-Diaz controlled and operated the MS-13 Sailors Locos Salvatruchos Westside Clique together with 24-year-old co-defendant Junior Noe “Trankilo” Alvarado-Requeno. The gang had its home base in Langley Park, Maryland, where it targeted local immigrant-run businesses by charging them “rent” for the privilege of operating in MS-13 territory.

The Sailors Clique also trafficked in drugs, including marijuana and cocaine. A large share of the proceeds of their illegal activities were sent to gang leadership in El Salvador to further promote the goals of the gang, using structured transactions and intermediaries to avoid law enforcement scrutiny.

To keep everyone in line, the Sailors Clique used violence against suspected rival gang members, as well as against its own membership for breaking gang rules. In March 2017, a member of the Sailors Clique who was hiding from law enforcement in the Lynchburg, Virginia area had a dispute with a local high school student over marijuana.

Among the most important rules of MS-13 is the prohibition against talking to law enforcement, embodied by the maxim “ver, oir, y callar” – see, hear, and say nothing. The gang enforced this rule by placing a “green light” – an order to kill – on any member of MS-13 who was thought to be snitching.

“Miguel Angel Corea-Diaz, also known as Reaper, reported directly to the gang’s top leadership in El Salvador and was responsible for implementing MS-13’s program of violence and intimidation on the East Coast,” said Nassau County District Attorney Anne T. Donnelly. “In 2017, our office, working with dedicated members of the DEA, began an investigation into illicit narcotics, which were being trafficked and distributed on Long Island. That investigation quickly mushroomed as we learned more about MS-13 and the reign of terror being directed by Corea-Diaz.”

Alvarado-Requeno was also convicted at trial and faces a mandatory sentence of life imprisonment. His sentencing is scheduled for April 25.