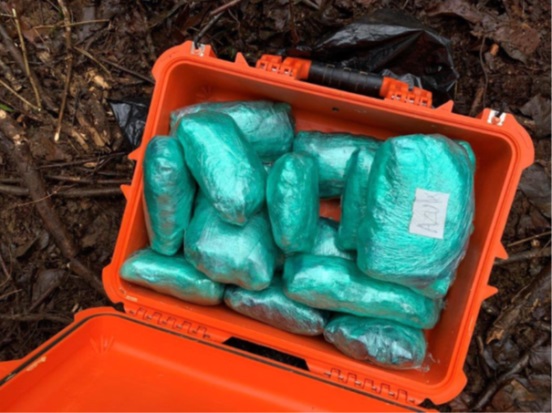 The Arlington, Washington based leader of a prolific and violent drug trafficking ring pleaded guilty last week to federal drug trafficking, firearms possession, and money laundering charges. 36-year-old Cesar Valdez-Sanudo was done in by incriminating communications caught on wiretap and guns and kilos of various narcotics found on his property.

The drug ring was busted in December 2020, following a lengthy wire-tap investigation. As authorities intercepted communications they quickly decoded the code words the gang used. One “water” meant 1 pound of meth. Ten “pieces” or “chocolates” meant 10 ounces of heroin.

Guns and a homemade silencer

Valdez-Sanudo was the leader of the ring. He is a Mexican national with a permanent U.S. resident card, who lived in a fifth-wheel trailer on a 10-acre property in a wooded area near Arlington.

In messages to his underlings, he discussed violence against members of the ring suspected of stealing drug loads. When he was arrested at the Snoqualmie Casino, he had three firearms in his vehicle, one with a homemade silencer. Was he going to use them? Well, Valdez-Sanudo had told others he planned to confront a member of the ring who owed a debt for drugs.

When law enforcement searched Valdez-Sanudo’s Arlington property, they seized more than 27 kilos of meth, nearly 6 kilos of heroin, and nearly 2 kilos of fentanyl pills, much of it buried underground. On the property, there were 8 firearms. They also seized cash, checks, and the contents of bank accounts as proceeds of the drug crime.

Valdez-Sanudo schemed to launder funds through casinos and through the purchase of property and vehicles. Conspirators sought to avoid banking transaction reporting requirements by making deposits in amounts below the $10,000 threshold.

Valdez-Sanudo faces a mandatory minimum ten years in prison and up to life in prison when sentenced on October 4, 2022.