Another win for the Italian government against the powerful ‘Ndrangheta this week as police in Italy arrested over 100 people connected to the Calabrian Mafia. The investigation titled “Nuova Narcos Europa” targeted the Molè Clan and brought to light its criminal operations in Calabria, Tuscany, and Lombardy.

The individuals were arrested on Tuesday and are charged with Mafia association, extortion, drug trafficking, illegal possession of a firearm, usury, fraud, and corruption. Many hailed from Piana di Gioia Tauro and are part of the Molè Clan.

The Molè Clan ran a cocaine pipeline from South America into the ports of Gioia Tauro and Livorno. Several dockworkers who worked for the Clan called them the Nuova Narcos Europa, which resulted in authorities using the name for their investigation into the illicit activities.

Photo: Surveillance of members of the Molè Clan 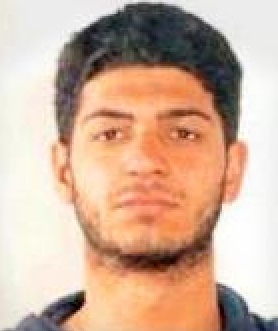 The group was led by Rocco “Roccuccio” Molè (right). At just 26 years old, he was very young to rule such an organization, but he had the right name and blood coursing through his veins. He was the son of imprisoned ‘Ndrangheta Godfather Girolamo "Mommo" Molè and grandson of boss Antonio Molè. His uncle Rocco, also a leader, was murdered on February 1, 2008.

In 2017 Molè opted to do community service for the poor and sick to avoid going to prison. It seems this was nothing but a ruse as the priest who had him under his wing later said the young mobster was unable to cut ties with his ‘Ndrangheta family.

While still doing good work, he received a call from his imprisoned father: “The time to play is over. We are at war and we have to deal with these (meaning the Piromalli Clan, longtime allies-turned-enemies). I’m betting on you.”

Tons of cocaine flooded into Italy and parts of Europe. Cocaine bricks seized by police were branded with the logo of the Real Madrid football team or with Masonic symbols.

Former Peruvian Navy divers were enlisted to recover cans loaded with cocaine in the waters around the Livorno docks. The Clan also hired workers at the ports who would let them enter the port area so they could unload loads of cocaine from the containers. They were given yellow bibs to be able to move freely in the harbor area.

South American chemists helped the Molès with processing the cocaine. They lived and were held in isolation in apartments in Gioia Tauro – the divers were too. Factories were set up in the countryside where the coke was refined and packaged.

Like all Mafia organizations, the Molè Clan also liked to diversify its portfolio. They controlled a large section of the fish market in Gioia Tauro. The man overseeing operations was Antonio “Mastro Ninnu” Albanese, Girolamo Molè’s (right) father-in-law. The ‘Ndrangheta likes to keep things in the family.

Traders were forced to buy fish from companies that belonged to the Molè Clan. All the fishing boats had to bring their produce to the auction run by Albanese’s company and businesses were then forced to participate in the auction without being able to buy directly from the fishermen. The Molès were the broker pocketing a large percentage of the money - some of which was used to support the families of imprisoned ‘Ndrangheta members.

The north of Italy has seen an increase in cases against the ‘Ndrangheta after it became clear the group had established a vast criminal empire there to invest and launder its dirty money. Along the way, they expanded into regional drug trafficking and corruption of local politics.

As was the case in various previous investigations into the ‘Ndrangheta, this one, too, brought to light the corrupting influence the Calabrian Mafia has on the country’s politics and institutions.

An agent of the financial police, provided information to the Molè Clan, while an employee of the Ministry of the Interior serving at the police station of Legnano allegedly created passports. These were authentic but with false general information. The group used these for fugitive members traveling abroad. In the Lombardy province, the former mayor of Lomazzo and a former town councilor there were suspected of helping the Molè Clan.

Prosecutor Riccardo Targetti appealed to Italian society not to “play with fire” by flirting with 'Ndrangheta clans, according to Italian news agency ANSA. He said they were capable of “taking control” of society.

The heat is on

The Calabrian Mafia enjoyed its time in the shadows, letting the Camorra and Cosa Nostra take most of the heat, but it now has become a priority for authorities worldwide as its power is seen as a threat to society.

Hundreds of Calabrian mobsters are currently in court in the biggest trial ever against the ‘Ndrangheta. 70 members were convicted of various crimes earlier this month and 355 members still face trial.

It seems the good old days of operating in secret have finally come to an end.