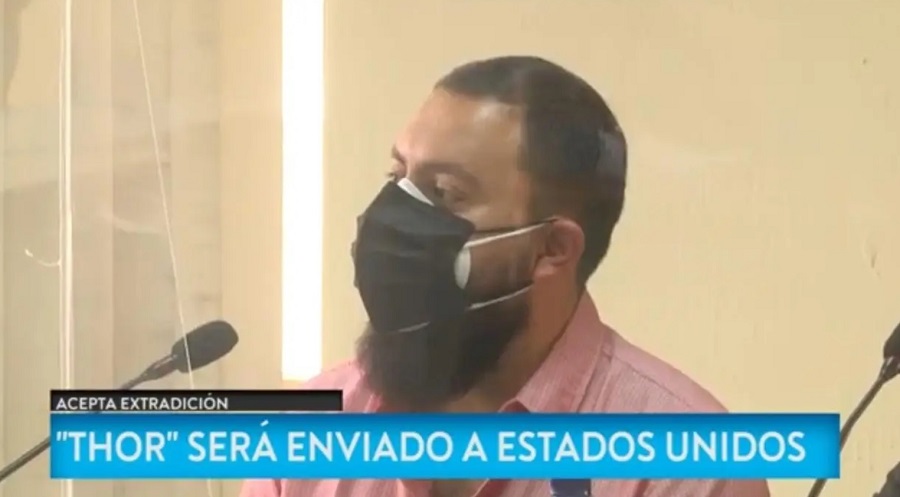 Alleged drug trafficker Rafael Orlando Ramirez Barillas (photo above) appeared in federal court in California on Thursday. Ramirez Barillas is a Guatemalan national who was extradited to the United States from Guatemala on February 10, 2022 to face international cocaine trafficking and maritime smuggling charges in the United States. He was ordered detained pending trial.

Ramirez Barillas, who goes by the nickname “Thor,” was arrested in Guatemala on July 17, 2021, and was extradited to the United States on February 10, 2022. His arrest stems from a long-term joint investigation led by the DEA and HSI in conjunction with the U.S. Attorney’s Office in San Diego.

He is charged with operating a large-scale cocaine trafficking conspiracy in Colombia, Ecuador, Guatemala, Costa Rica, El Salvador, and Mexico with the aim of smuggling the drugs into the United States. He is also charged with participating in a conspiracy to traffic cocaine on board a vessel.

Authorities claim Ramirez Barillas was alleged to be the partner of convicted Guatemalan drug trafficker Luis Carlos Melgar-Morales, who goes by a similar superhero nickname as Ramirez Barillas: “Aquaman”.

Melgar-Morales admitted to distributing over 10,000 kilograms of cocaine during an approximately 2-year conspiracy. Ramirez Barillas was described as an organizer and leader in the conspiracy to distribute cocaine in Guatemala and several other South and Central American countries. As part of the conspiracy, Ramirez Barillas and his crew coordinated the smuggling of multi-ton quantities of cocaine from South America to Guatemala with an ultimate destination of the United States.

During the investigation, the United States Coast Guard made multiple seizures of cocaine from vessels on international waters that were linked to Ramirez Barillas.

“This case, including last week’s extradition, demonstrates the success DEA and our law enforcement partners have had targeting foreign drug sources of supply,” said Special Agent in Charge Shelly S. Howe. “DEA will continue to seize large quantities of drugs before they reach our shores and devastate our communities. Our strong relationships with our foreign counterparts allow us to bring drug suppliers to justice in the United States.”