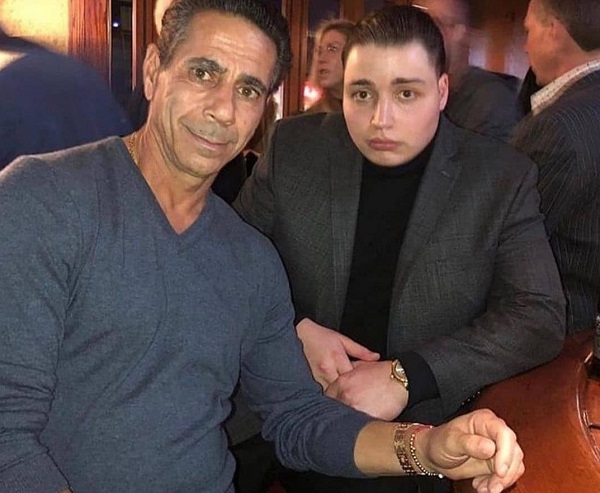 Gambino crime family associate Peter Tuccio (pictured above, right, next to Philadelphia Mafia boss Joseph Merlino) will have to do 10 years in prison for setting a Mercedes Benz on fire to pressure a businessman into continuing to pay extortion money to the Gambino family. He was sentenced yesterday.

29-year-old Tuccio had pleaded guilty in January of 2021 to using fire to commit one or more felonies. He committed the crime in 2015 when a businessman who had been extorted for years by Ignazio Alonga, a capo in the Gambino crime family, began avoiding Alonga in an effort to stop making his annual extortionate payment.

On December 3 of that year, Tuccio and several other mob associates observed the businessman leave a smoke shop in Howard Beach and drive away in his 2014 Mercedes Benz. They followed the businessman at a high rate of speed through the streets of Queens and confronted him outside a pizzeria, where Tuccio asked about Alonga and complimented the businessman’s car.

Tuccio and his cronies schemed to set the man’s car on fire as a message that he had to continue making payments to Alonga. Later that night, the businessman heard a loud noise and saw that his car was on fire outside of his residence. After the arson, he made additional payments to Alonga, who himself passed away in 2016.

Loyal to the “cause”

If his Instagram is anything to go by, then Tuccio will do his time without any issues and even with a sense of pride. He is outspoken about his loyalty to omerta, the code of silence. He also seems to be a firm believer in the “cause”, or shall we say La Cosa Nostra.

He will be a relatively young man when he gets out. Still, the streets will once again have changed. The people will have as well. Interesting to see which path he decides to choose then.