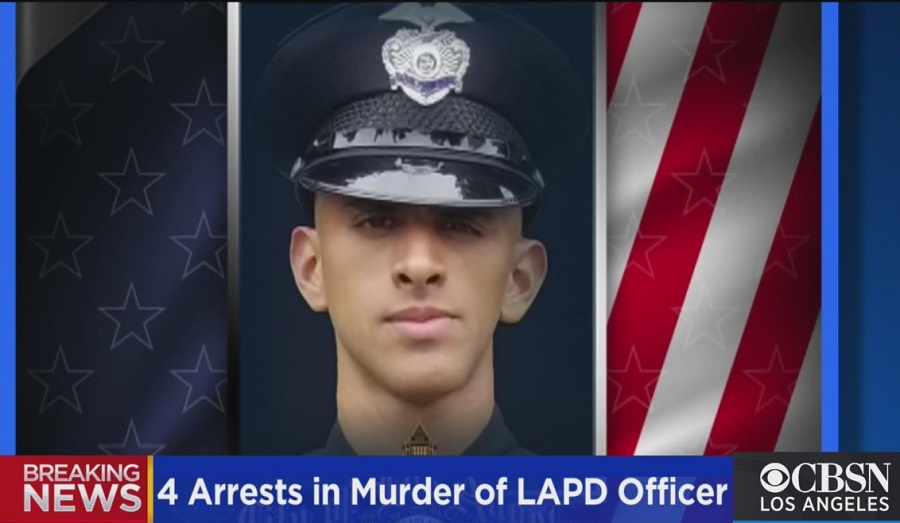 Three members and an associate of Florencia 13 (F13), a Los Angeles street gang, were charged Thursday with violating a federal racketeering statute for their roles in the robbery and fatal shooting earlier this week of Los Angeles Police Officer Fernando Arroyos (photo above).

Prosecutors allege that two of them confronted Arroyos and his girlfriend on the night of January 10, stole items from them, and then shot Arroyos, who died soon after suffering a single gunshot wound.

Arroyos and his girlfriend were looking at a home potentially to purchase on East 87th Street in Los Angeles when a black pickup truck arrived. Rios and Cisneros confronted the victims, pointing guns and removing property from both, including chains from Arroyos’ neck.

Investigators have obtained surveillance video showing the black pickup arriving at a residence near the shooting, where Contreras is seen exiting the vehicle and helping an apparently injured Cisneros out of the truck, the affidavit states. All four defendants were in the vehicle and allegedly were at the scene of the robbery and shooting.

Florencia 13 is a large, multi-generational street gang that previously has been the subject of federal prosecutions, including two large racketeering cases.

The defendants in this case were taken into custody on Wednesday by investigators with the Los Angeles County Sheriff’s Department. Those defendants are expected to be transferred to federal custody Friday morning and to make their initial court appearances Friday afternoon in United States District Court.

The defendants charged are:

The defendants face a potential death penalty – and minimum sentence of life in federal prison without the possibility of parole – because Officer Arroyos allegedly was murdered during the robbery.