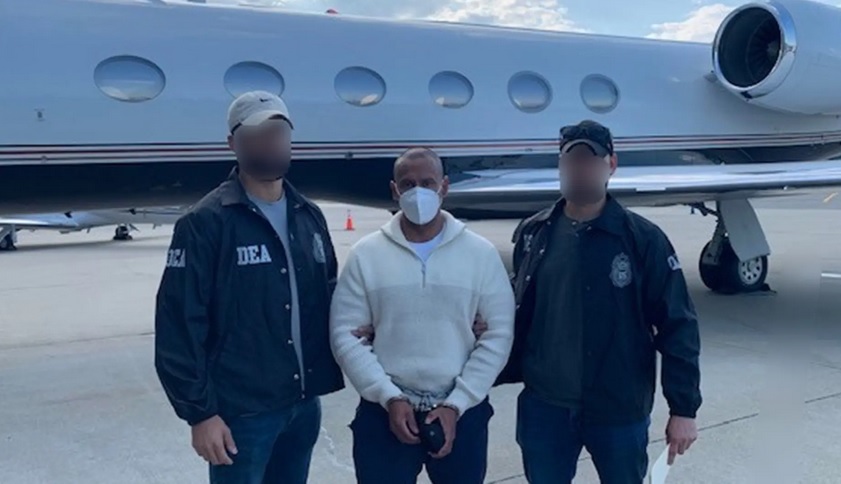 A Colombian accused of trafficking multi-kilogram shipments of heroin into New York City and of coordinating an international money laundering scheme was extradited from Colombia to face charges. Junior Escobar Miranda (photo above) arrived in New York from Colombia last week and was scheduled for arraignment yesterday.

Escobar Miranda was, prosecutors allege, a hands-on kind of boss. He was based in Cali, Colombia, and ran his organization from there. He maintained direct oversight of nearly all aspects of his lucrative drug trafficking business.

His operation was simple, but very profitable. He used human couriers, known as “drug mules,” to bring the heroin into the U.S. concealed inside suitcases. Once the narcotics successfully arrived in the U.S., he allegedly coordinated the delivery of the heroin to New York City-based associates who would then sell the heroin to customers on Escobar Miranda’s behalf.

The group used BlackBerry Messenger to communicate. Those communications revealed that Escobar Miranda instructed his New York City-based associates regarding the price at which kilograms were to be sold and coordinated the collection of the proceeds from those transactions.

He then worked with a Chinese national to launder the bulk of those proceeds while also transferring a portion of the cash to multiple bank accounts in Colombia.

This hands-on approach, in which he controlled almost all aspects of the smuggling, selling and laundering of sizeable drugs proceeds, ultimately led to his downfall. Colombian authorities intercepted his communications and contacted the DEA about their find.

“He’s going to pick up the suitcase”

In a communication that illustrates his close control of his dope business, Escobar Miranda allegedly provided detailed instructions related to the receipt of a suitcase containing narcotics in a text message on August 5, 2017. “He’s going to pick up the suitcase. You are going to be with him at all times until he pays for everything…they want to take it and test it all out,” Escobar Miranda allegedly said.

Escobar Miranda subsequently provided directions to an individual in Queens, New York, related to the transfer of narcotics proceeds to multiple accounts in Colombia. On August 9, 2017 he allegedly wrote, “And please send those via regular money order, please don’t send them through the bank.”

In the last charged shipment in October of 2017, Escobar Miranda allegedly coordinated the delivery of eight kilograms of heroin to an individual in New York City, writing, “It’s all there. There are 8 in total.”

Conversations between Escobar Miranda and his associates referenced at least two shipments of a total of approximately 10 kilograms of heroin to New York City between May and October of 2017. Two of those kilograms were seized by law enforcement in Queens in October 2017 and over $100,000 in cash related to a previous sale were recovered in August 2017, also in Queens. In all, the estimated value of the narcotics that Escobar Miranda smuggled into New York City during a six-month period was greater than $500,000.

Escobar Miranda’s illegal activities coincided with a surge in the heroin supply in New York City and a sharp escalation in overdose deaths. In contrast to other narcotics suppliers based in Colombia and elsewhere, who partner with Mexican cartels and other intermediaries to smuggle drugs in the United States, Escobar Miranda personally managed his business from beginning to end. This approach afforded him greater control over profits while reducing his dependency on other criminal organizations.

It also made him extremely vulnerable. Now, he will face justice in the United States.