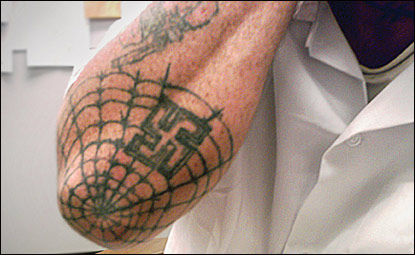 Behind bars inmates follow a different set of laws. Specifically, the law laid down by the gang they belong to. Whatever the gang’s shot callers want, its members do. If not, things get real violent real quick.

52-year-old Mitchell “Lifter” Farkas of Baton Rouge, Louisiana, lives by this code. Housed at the federal prison U.S. Penitentiary (USP) Big Sandy in Martin County, Kentucky, he is a member of the Aryan Circle gang.

The Aryan Circle is a violent, white-supremacist, prison gang with hundreds of members operating throughout the country, both inside and outside of prisons. It was established in the mid-1980s within the Texas prison system. Its structure and influence expanded to rural and suburban areas throughout Texas, Louisiana, and Missouri.

The gang emerged as an independent group during a period of turmoil within the Aryan Brotherhood of Texas. It was relatively small in comparison to other prison-based gangs, but grew in stature and influence in the 1990s, largely through the use of violence.

Especially if the shot callers believe gang rules had been broken. Like had allegedly happened at USP Big Sandy. Farkas was ordered to shank another inmate for exactly this reason. He and Johnathan Gober went to work and stabbed the man for violating the rules of the Aryan Circle.

A federal jury in the Eastern District of Kentucky convicted Farkas on Wednesday, August 10, for his attempted murder at the direction of the Aryan Circle gang. He is scheduled to be sentenced on December 5 and faces a maximum penalty of 20 years in prison.