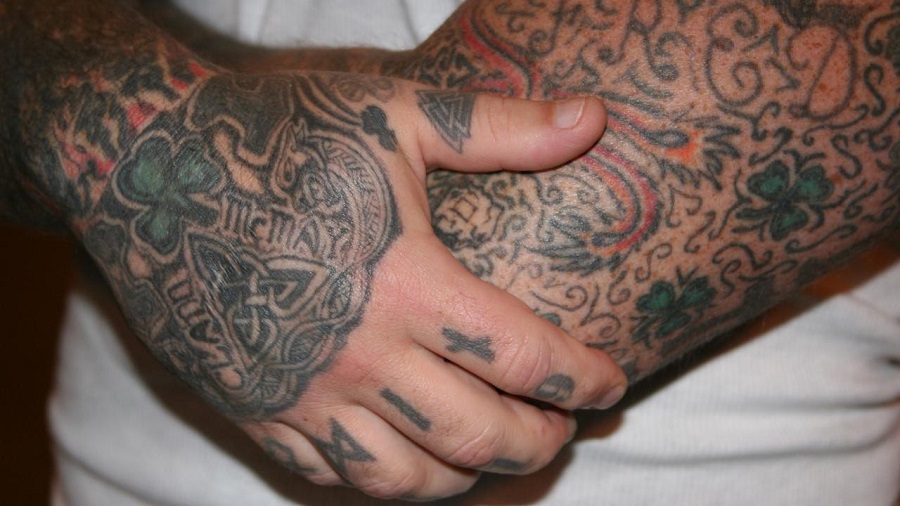 A member of the Aryan Brotherhood, one of America’s most notorious prison gangs, pleaded guilty in federal court on Thursday to methamphetamine trafficking. 44-year-old Jimmy Jack Pinkley isn’t the brightest criminal and law enforcement didn’t have a hard time catching him.

He was stopped by a Christian County, Mo., sheriff’s deputy on January 17, 2021, in the area of Evergreen Circle, while he was driving down multiple roads of the trailer park and stopping briefly at multiple houses.

When the deputy attempted to make a traffic stop, Pinkley pulled into a driveway and got out of the vehicle. The deputy ordered him to show his hands, but he reached with both his hands to his rear waistband. The deputy removed his firearm and again ordered Pinkley to show him his hands. After a brief pause, Pinkley lifted his hands above his head. He was then handcuffed and frisked for weapons.

Pinkley appeared to be very nervous, sweating and breathing heavily. The deputy searched the vehicle and found a brown leather bag on the front passenger seat that contained approximately 195 grams of methamphetamine in multiple individually wrapped clear plastic baggies.

He also told investigators that he is a member of the Aryan Brotherhood and that he joined the gang during his first stint in state prison. He showed them his patch to the gang.

Law enforcement officers executed a search warrant at Pinkley’s residence, where they found a loaded Maverick 12-gauge shotgun leaning against a safe in the metal shop located on the property behind Pinkley’s trailer. Inside the safe, officers found a small baggie of methamphetamine and a set of digital scales.

The plea agreement also refers to an earlier traffic stop on October 29, 2020. Law enforcement officers stopped a Pontiac Grand Prix in which Pinkley was a passenger. Officers found a brown nylon case under the front passenger’s seat that contained 11.48 grams of methamphetamine and drug paraphernalia.