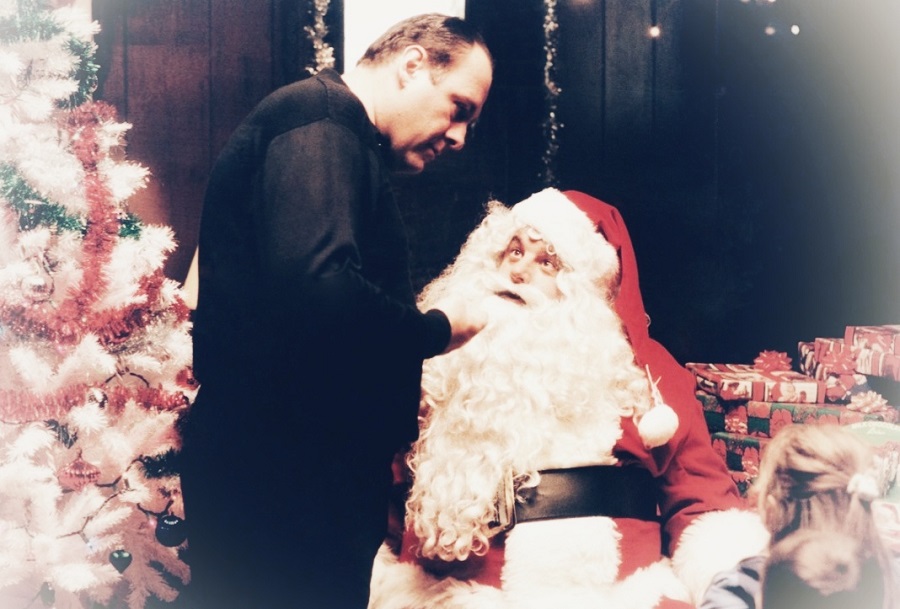 ‘Tis the season! Merry Christmas everyone! At Gangsters Inc. we don’t do presents. We do gangster stories! Lots of ‘em! Especially for Christmas we’ve dug up five stories that show how mobsters spend their Christmas. Spoiler alert: Three end in murder.

“Carmine DiBiase went out on Christmas Day and got drunk. Very drunk. Very, very drunk. And then he shot and killed someone.” So begins Thom L. Jones’ Mafia Christmas Carol of Carmine DiBiase, the ruthless gangster believed to have been involved in the murder of “Crazy Joe” Gallo. Read the entire story titled "Give a Man a Gun" here.

For those of you thinking DiBiase murdered a vicious gang rival, you’re wrong. “Not just any old someone, but a best friend someone. A guy who had stood by Carmine at his wedding, as his chief attendant. Been godfather to one of his children. Was his business partner.”

In the mob you kill those close to you. And they never see it coming. Nor do you. If that doesn’t get you in the mood for a warm family gathering this Christmas I don’t know what will.

Well, maybe another one of Thom L. Jones’ stories?

This one takes place on the early morning of Christmas Eve in 1992. Tommy Uva and his wife Rosemarie are sitting in their car, waiting in front of traffic lights in Ozone Park, a suburb in Queens, New York.

“They sit listening to the car radio, waiting for the lights to change. Maybe Rosemarie is bobbing with excitement, looking forward to their day of last-minute Christmas shopping. She is carrying a wallet with $1000 cash.”

“Just before the traffic signals change, two men approach the car and raising handguns, begin shooting into the vehicle through the windows. Tommy and Rosemarie are each hit in the head, three times, and die instantly. Tommy slumps forward over the steering wheel, pressing down on the accelerator and the Mercury moves forward, wheeling at an angle across the intersection, colliding with another vehicle before it stops against the curb outside a house.”

The five Mafia families in New York had had enough of Tommy and Rosemarie for they had spent the last six months robbing their social clubs.

Investigations revealed that the Uvas “were picking social clubs run by the Gambino, Bonanno and possibly the Colombo crime families in Brooklyn, Queens and the Little Italy area of Lower Manhattan. At least two of the social clubs belonged to senior capi or crew bosses in the Gambino crime family and a third Gambino linked spot, Café Liberty, which was robbed by the Uvas twice, was also the scene of a particularly brutal inter-family mob killing. They also robbed The West End Social Club run by the Bonanno family consigliere, or counselor, on Bay 16th Street in Bensonhurst.”

As Thom L. Jones points out in his detailed article on the Uvas, titled "The Kindness of Death" which you can read here, “Criminals in the league of the Mafia rarely, if ever, seek police assistance to sort out their problems, so official records are more likely to err on the conservative side.”

But robbing the mob is about the most dangerous thing you can do, causing Jones to label the Uvas the first people to commit suicide by mob.

Snitches get… no presents

Still, the worst thing you can do to the Mafia, is testify against it. Especially in Italy that kind of behavior will get you killed – and your family as well.

On Christmas Day of 2018, 51-year-old Marcello Bruzzese was shot dead when he arrived at his home in the historical center of Pesaro, Italy. Assassins riddled his body with 30 bullets. His crime? His brother Girolamo was a member of the ‘Ndrangheta, the Calabrian Mafia, and – more importantly - a snitch.

Girolamo had made his life complicated by first beefing with his boss and then shooting him. Rather than wait for the hitmen to knock his door down, he ran to the police and became a witness.

It was a far-reaching decision that led to him and his relatives, including his brother Marcello, joining the witness protection program. But Marcello had enough of the program and decided to leave it. It proved to be a fatal decision.

Cards and the best gift ever!

With death out of the way, let’s focus on some more lighthearted gangster stuff, shall we?

Well, leave it to Genovese mob boss Anthony “Fat Tony” Salerno to provide the entertainment. Though he was one of the crime family’s leading men, he answered to Vincent “Chin” Gigante, the true boss of bosses. Gigante used Salerno as a front to throw off the feds. And, to be on the safe side, Gigante also had a crazy act going for several decades that saw him urinating in public and walking the streets in his pajamas.

That was all the inspiration “Fat Tony” needed when he made this special Christmas card for some members of the Genovese mob. Read the entire story behind Salerno's card here.

Now, let's get started with the presents, shall we? Colombo Mafia family underboss "Wild Bill" Cutolo got the best gift ever for Christmas in 1992. What it was? In the words of Chris Rea, who sang, "I'm driving home for Christmas. Oh, I can't wait to see those faces." Read the entire article titled "The Christmas Verdict: How Colombo Mafia family leader “Wild Bill” Cutolo got the present he wished for" here.

Merry Christmas everybody! Gangsters Inc. wishes you all the best for 2022!